Inside the clubhouse where Duterte holds court DAVAO CITY, Philippines – The fate of the Philippine republic is being decided in a clubhouse at the end of a lonely road on the edge of Davao City.

Rodrigo Duterte, the country’s president-elect holds court inside the two-story structure that looks more like a modern home than a seat of power.

The action began last Monday, May 16, when Duterte, after a week spent in hibernation, held a press conference in one of the clubhouse’s rooms. It was there where he announced his first batch of Cabinet appointments and first acts as president, including the imposition of a curfew for minors and a liquor ban in public places. They were ideas he had jotted down in notes while he recuperated “in the mountains.”

After arriving at 2 pm on Monday, Duterte left the clubhouse at around 11 am the next day – clocking in a full 20 hours of work. 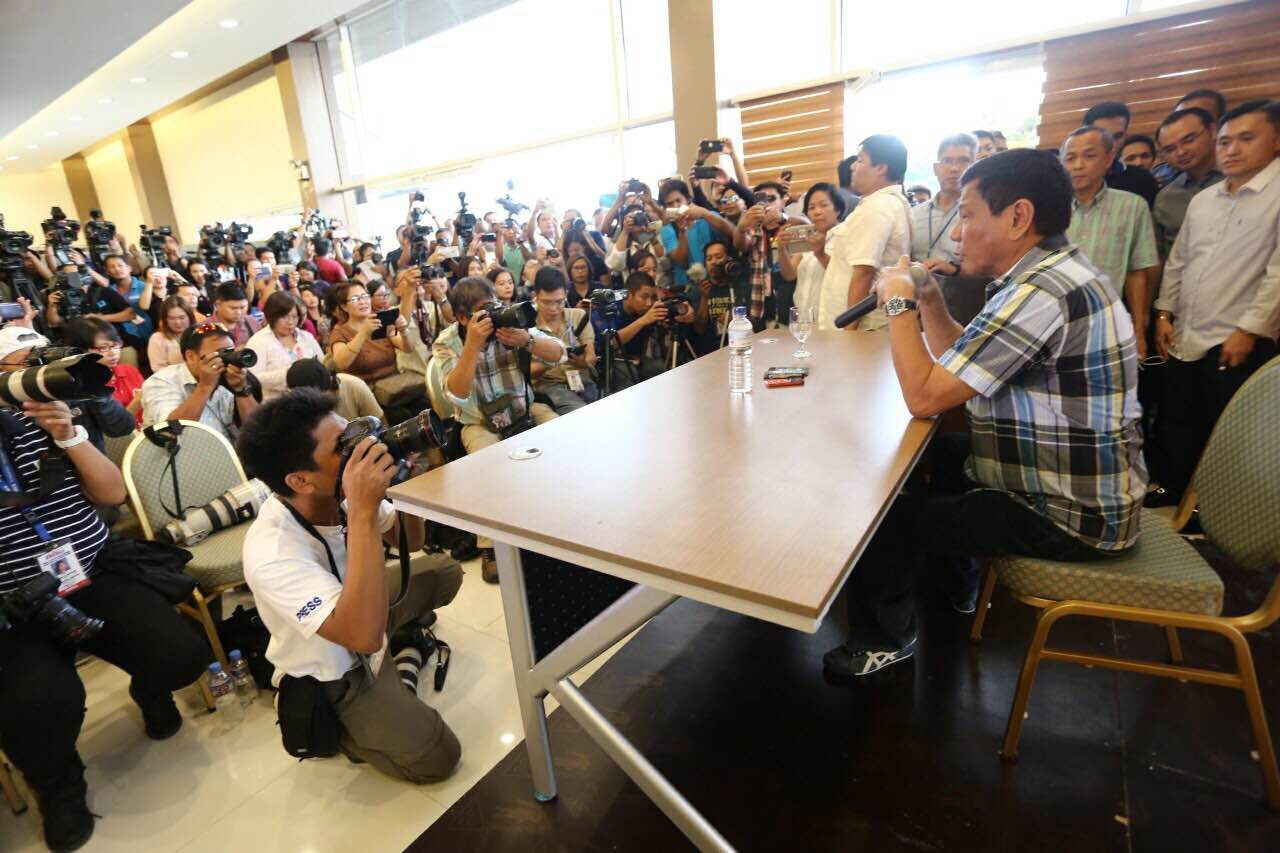 The clubhouse is an unlikely setting for powerplay. It is the only operational structure in the Matina Enclaves, a residential development so new that the condomonium is still an unpainted shell and the swimming pool an empty box.

Minutes before Duterte’s press conference, workers were still drilling over the heads of waiting journalists. An electric fan had to be brought in to give the only airconditioning unit a boost. But Matina Enclaves is owned by the Escandor family, the same family behind the Royal Mandaya Hotel. Duterte and his staff routinely make use of the hotel for their operations and events, reportedly free of charge because the Escandors are close to Duterte.

His spokesman, Peter Laviña, said the clubhouse’s ground floor conference room will be Duterte’s “temporary office” while the second floor will serve as a “reception lounge” for visitors.

The choice of the Matina Enclaves was made because of its large parking space, its proximity to Duterte’s home, and the lone road leading to it which makes security easier to arrange.

It was in the clubhouse’s ground floor conference room that Duterte met batch after batch of visitors on Monday, May 16. By around 11 pm, only number 23 out of the 90 still lined up had been granted an audience. Number 24, a youth group from Cagayan de Oro was excitedly waiting for its turn. The group had arrived in Davao City that morning. Aside from meeting ardent supporters, Duterte met the ambassadors of China and Japan, senators, political families, actors, prominent local government officials, and more. Some said they were there merely to congratulate the president-to-be. Others were there to discuss Cabinet appointments. Media waited at the clubhouse’s driveway to interview VIPs as they walked from the entrance to their cars.

From the compound’s vast parking lot, the clubhouse looked like the scene of a fashionable party, with lights glinting from a roofdeck crowded with people, the sound of conversation and clinking of glasses drifting through the humid night air.

But inside, the festive air was dampened by the silent frustration of waiting. It didn’t help that the not-quite-finished clubhouse lacked airconditioning systems to keep up with the number of people.

Some guests opted to drive back to their hotels and return later that night or early the following morning. No such rest was available to Duterte who ended the talks the next day close to lunchtime, so tired he could only nod bleary-eyed to photo requests as he made his way to his car.

The clubhouse will see the same kind of action in the following days. On Wednesday, May 18, Duterte is scheduled to meet there with the Russian ambassador.

In the next few days, it is expected to be the destination of droves of visitors now billeted in Davao City hotels clutching curriculum vitae and proposals for the Duterte administration.

The “giant job fair” has attracted so many hopefuls that some hotels say they are fully-booked until June.

Even before his proclamation, Duterte, the first Mindanaoan president, has already achieved something: a shift of power from Metro Manila to his beloved Davao City. – Rappler.com