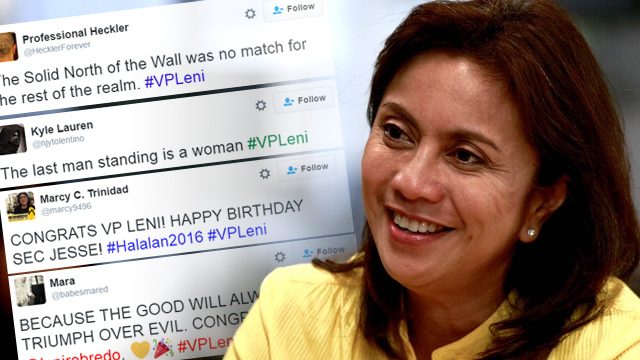 MANILA, Philippines – On the day of her late husband’s birthday, Liberal Party bet Leni Robredo led in the official canvass of the highly-contested vice presidential race.

After 3 days, Congress finished the canvassing of votes for president and vice president a little past 7:00 pm Friday, May 27. Out of 167 certificates canvassed, Robredo got 14,418,817 votes. Her rival Senator Ferdinand “Bongbong” Marcos Jr got 14,155,344 votes.

Her supporters took to social media to congratulate Robredo, who is now just waiting to be proclaimed as the new vice president of the Philippines. 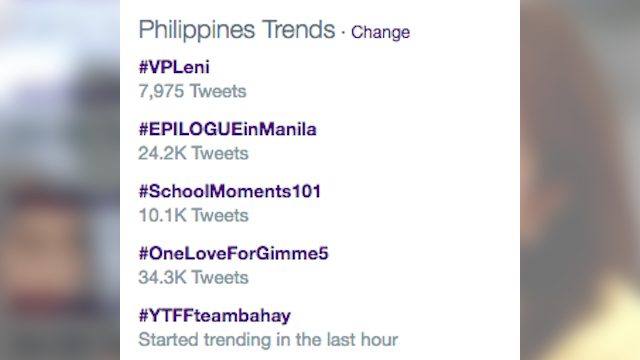 Move over Daenerys Stormborn Targaryan, Breaker of Chains and Mother of Dragons.

Leni Robredo is the new Khaleesi.

After polls closed on May 9, another hashtag for Leni – #LabanLeni (fight Leni) – started to trend worldwide as her supporters waited to see if she would catch up with Marcos’ numbers in the unofficial, partial results. At 3:29 am of May 10 – the morning after elections, she did.

Robredo had repeatedly mentioned in interviews that she ran for vice president only after her 3 daughters gave their nods. Aika, Tricia, and Jillian were visible in their mother’s campaign.

Her second daughter Tricia Robredo posted a wacky photo with her beloved dad.