#TheLeaderIWant: Mar Roxas on his return to politics 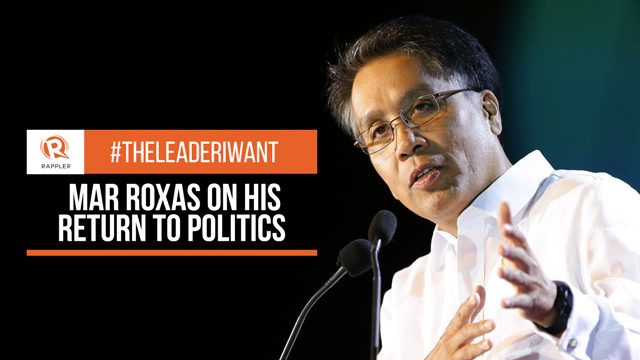 MANILA, Philippines – Mar Roxas has been “Mr Palengke,” the torch bearer for “Daang Matuwid,” and, during a two-year hiatus from politics, a travel and adventure “blogger” of sorts.

But in May 2019, the former Liberal Party president is applying for a job he’s held before – as a senator of the republic.

He is only one of two in the opposition coalition that’s made it to the so-called Magic 12 in surveys – an unsurprising feat, considering he’s topped the senatorial race before.

What pushed the reluctant politician to once again join the fray? The former legislator, Cabinet member, and one-time presidential candidate drops by Rappler on Friday, February 8. He will talk about his 2019 candidacy, what makes it different from his electoral runs in the past, the economy, and what he intends to bring into the Senate this time.

Bookmark this page or tune in to Rappler’s social media pages at 2 pm to catch the interview live. – Rappler.com