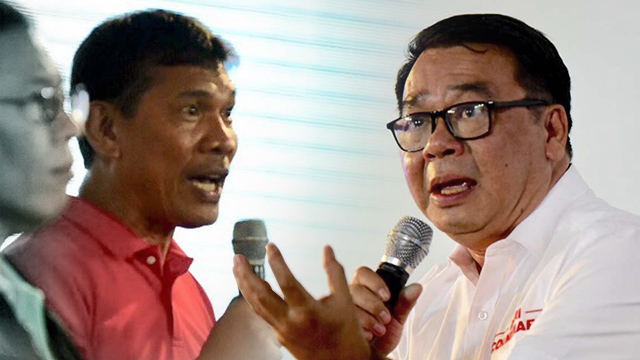 MANILA, Philippines – Two senatorial candidates said they would support the repealing of the Philippine Mining Act of 1995, saying it protects mining companies more than it does Philippine communities.

Leftist leader Neri Colmenares and labor leader Leody de Guzman took this stance in response to a question on how they would reconcile the government’s mining policies and the impacts of climate change to local communities which are aggravated by destructive and irresponsible mining.

They were asked this on Monday, March 4,  during the #TheLeaderIWant  senatorial forum organized by Rappler and Ateneo School of Government.

Aside from this, Colmenares said he would push for a moratorium on mining in areas with IP communities. He would also be aggressive in calling for and holding investigations into corruption in the Mines and Geosciences Bureau, the office in government which handles mining permits.

“Our Mining Act is really profit-driven, really for the interests of the businessmen… I will call for the repeal of the existing pro-capitalist laws because it should be for protection for our people and our environment,” he said in Filipino.

Colmenares linked destructive mining to moves by the administration to amend the 1987 Constitution.

There have been proposals to change the constitutional restrictions on foreign equity. The charter limits foreign ownership in key industries to 40%. But for Colmenares, easing such restrictions would just allow foreigners to control more natural resources mined from Philippine soil.

“This cha-cha (charter change), it will open our natural resources to transnational corporations so my call is for pro-people Mining Act and fight cha-cha, especially now,” he said. – Rappler.com