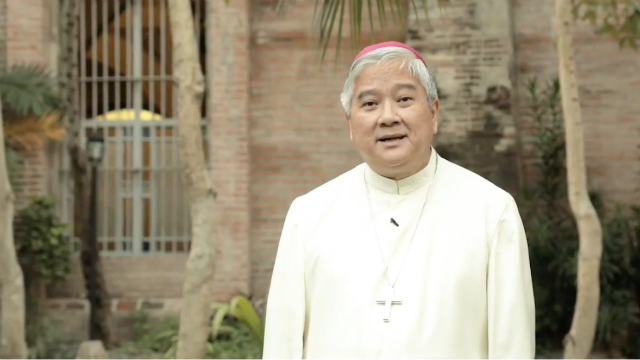 MANILA, Philippines – Lingayen-Dagupan Archbishop Socrates Villegas released a video on Tuesday, March 5, casting doubt on President Rodrigo Duterte ahead of the May 13 elections, as the prelate urged Catholics not to betray God by their vote.

Villegas, one of the most prominent bishops in the Philippines, posted the video on his Facebook page with the following caption: “Are you going to betray God again?”

The video is credited to the Ministry of Evangelization of the Archdiocese of Lingayen-Dagupan, which Villegas heads.

The video began with the words, “I believe… therefore I reject!”

(The fool says in his heart, “There is no God.” Their deeds are loathsome and corrupt; not one does what is good.)

The video ended with movie clips of a bloodied Jesus being scourged then nailed on the cross.

It was released a day before Ash Wednesday, the start of the Catholic penitential season of Lent.

Before the 2016 presidential elections, Villegas had released a similar message as then-president of the Catholic Bishops’ Conference of the Philippines (CBCP). The statement, which he signed as CBCP president, was titled, “Mayor Duterte?”

Issued a day after then-candidate Duterte cursed at Pope Francis, Villegas’ December 2015 statement denounced murder and adultery as part of “a great scourge of Philippine politics.”

“Vulgarity is corruption. When we find vulgarity funny, we have really become beastly and barbaric as a people,” Villegas said in December 2015.

“When a revered and loved and admired man like Pope Francis is cursed by a political candidate and the audience laugh, I can only bow my head and grieve in great shame. My countrymen have gone to the dregs,” he added.

Villegas is one of the bishops who have earned the ire of Duterte’s allies, including his daughter Sara, for criticizing his bloody war on drugs.

Another bishop blasted by Duterte – Caloocan Bishop Pablo Virgilio David, who is also CBCP vice president – is now facing death threats. David has denounced the killings in Duterte’s anti-drug campaign, as he describes his diocese as “killing fields.”

The Catholic Church is one of the staunchest critics of Duterte’s drug war, even as Duterte lambasts bishops, priests, and others who oppose his policies. (READ: Duterte said kill the bishops – and his word became flesh) – Rappler.com