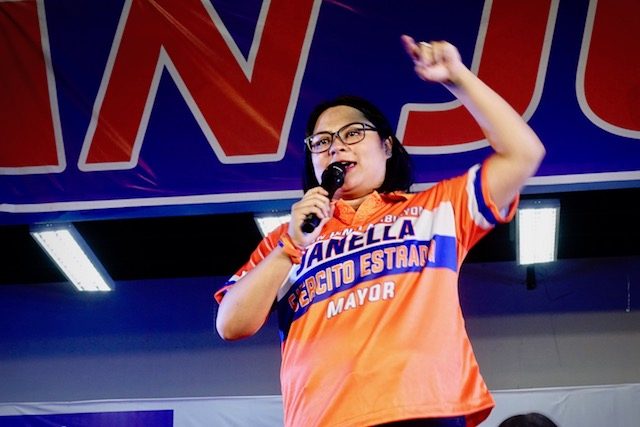 (Here in San Juan, I found my mission, and my life’s purpose. My mission is to contribute skilled service and concrete programs so that our city continues to improve.)

Before thousands of San Juan residents at the Plaza ng Masa on Saturday, March 30, the daughter of former senator Jinggoy Estrada vowed to provide affordable healthcare and more housing for the poor.

She then said she will open a mobile application for government services, and to strictly enforce a city ordinance mandating all businesses to have at least half of their employees to be locals.

The 29-year-old has gone far in her political career. She entered  politics in 2013 as city councilor, then moved up in 2016, when she was elected as vice mayor.

This year, she’s up against former vice mayor Francis Zamora, the bet of the ruling party PDP-Laban.

If she wins, she would be the 4th in her family to become San Juan City mayor, after her grandfather Joseph Estrada, her father, and Guia Gomez. Estrada’s promises: Estrada anchors her campaign programs on the thrusts she worked on as vice mayor: JELS which stands for jobs, education, livelihood, sports, and social services.

Aside from enforcing the “50% ordinance,” Estrada vowed to compel job fairs in San Juan to have a quota of hiring half of applicants “on the spot.”

For education and livelihood, she plans to bring in more scholarships and increase the budget for public schools in the city. She then guaranteed jobs for residents who will undergo training programs on culinary arts and information technology.

Then for the recreation of residents, she promised to build a sports center – like the one in Marikina City – complete with a “function hall” and a public swimming pool. Her family’s help: Estrada exuded confidence while enumerating her grand promises. After all, she already has generations of political capital in San Juan City.

During the campaign proclamation, Estrada enjoyed the endorsement of her family’s political veterans – politicians she could count on if she won the mayoral race.

Her grandfather, former president Joseph Ejercito Estrada, made an appearance too, raising her hand in front of ecstatic supporters before giving her a tribute.

Her father Jinggoy then dropped by to give her his blessing. A former San Juan City mayor himself, Estrada recalled how his daughter would accompany him in his campaign sorties when he ran for vice mayor, and now, in his bid to return to the Senate. He believed his daughter was ready to become San Juan’s local chief executive.