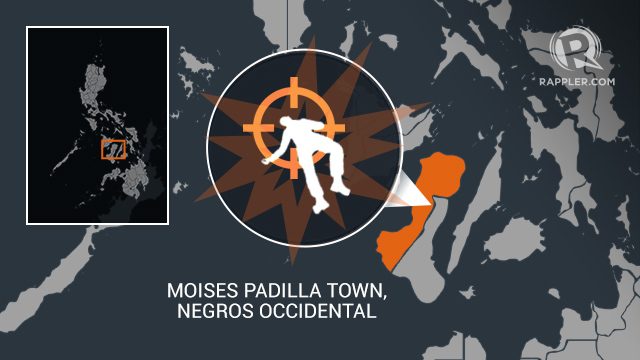 They had just come from a campaign sortie in Barangay Inolingan when they were attacked by 20 armed men on board a vehicle and a motorcycle. They peppered the Garcias’ pick-up truck with bullets.

Moises Padilla Vice Mayor Ella Garcia-Yulo, the sister of Mark Garcia, was in the campaign convoy but survived the attack. She is running for mayor in the coming elections.

Yulo was recently released from jail after she and her husband posted bail for illegal possession of explosive charges.

Police Major Junji Liba, town police chief, said they were still investigating the case to establish the motive of the killing, whether it would be considered as election-related violence.

The Commission on Elections had declared Moises Padilla town  an area of immediate concern under the red category, which means it has a history of election-related incidents in the last two elections, intense political rivalry, and the serious armed threat posed by the New People’s Army (NPA) and other lawless elements.

This came after Councilor Jolomar Hilario was killed in his home in Barangay Inolingan on March 31, allegedly perpetrated by the NPA.

Three days ago, another councilor was killed in the province.

Escalante City Councilor Bernardino Patigas was on his way home when he was killed by a lone gunman. – Rappler.com