MANILA, Philippines (UPDATED) – The 2019 polls are underway. As expected, some technical issues involving vote-counting machines (VCMs) have occurred, ranging from paper jams to malfunctioning machines being shipped out and the precinct reverting to manual counting.

We also have one high-profile incident this early, with former vice president Jejomar Binay unable to cast his vote as the VCM repeatedly rejected his ballot. See this in our list below along with the other incidents we’ve seen so far both online and on the ground. Keep this page bookmarked as we’ll update this throughout the day.

The voting machine at the precinct where Grace Poe is set to vote has also experienced issues:

The voting machine at the precinct at Sta Lucia Elementary School in San Juan where reelectionist senator Grace Poe is set to vote is experiencing technical difficulties, as the machine fails to read the ballot. pic.twitter.com/UPNawr07Tm

Reports in other regions:

The voters are unable to cast their votes because the machine is having technical difficulties causing the delay of the voting process. #PHVote @rapplerdotcom @MovePH pic.twitter.com/nZBE7vMlcw

LOOK: A technician hauls a "defective" PCOS machine out of a polling precint in A. Montes Elem. School in Iloilo City Proper. They have announced to the crowd that they'll have to revert back to manual counting for the precint. #PHVote @MovePH pic.twitter.com/Mxbz2Hffn0

WATCH: The crowd grows imparient after a delay in the voting procesdure due to a "defective" PCOS machine in A. Montez Elem. School. The precint is that assigned to residents of Monica Blumentritt in Iloilo City Proper. #PHVote @MovePH pic.twitter.com/1Boi8CLE7U

PCOS machine at voting precincts 0045A and 0045B at Eastern Cogon Elementary School in Tagbilaran City, Bohol are seen malfunctioning with a "paper jam" error. Video courtesy of voter @bullfrog__ | @rapplerdotcom #PHVotepic.twitter.com/UQWRQLKZPz

LOOK: Voters in Bongbongon Elementary School, Kauswagan, Cagayan de Oro City asked to place ballots in a box, told that ballots will be run through the machines after malfunction is resolved. Photos by Ella Camille Dinogyao. @phvote #PHvote pic.twitter.com/ugX6H1UQ2Y

VCM in Brgy. Pescadores precinct malfunctions. Lodrigo Basco Jr., Chairman of the precinct, says voting will continue. However, they are unsure of the status of the prior votes casted and are still waiting for further updates. #PHVote | via @lhsuano pic.twitter.com/xhNDnXneoP

A netizen reports that at a polling center in Valle Verde, Pasig City, voting machines did not work so they were instructed to cast their votes and leave their ballots.

A list of received ballots is also handed for them to write their names as receipt. #PHVote pic.twitter.com/eeENFg2Rm7

In San Juan, Metro Manila, voters are unable to cast their votes because the machine is having technical difficulties at the Santa Lucia Elementary school: In Makati, some have reportedly resorted to hitting the machine when it malfunctions:

Yeah. When we voted around 6:30am, the VCM keeps having paper jams every time a new ballot is entered in the machine. By 8am, gumagamit na sila ng patpat pamalo sa gilid ng container para hindi magloko. #PHVote

But the election officer of Lapu-Lapu City says the machine shouldn’t be shaken in case of malfunction:

In the town of Moises Padilla in Negros Occidental, 8 voter registration verification machines (VRVMs) also malfunctioned during the first hour of the polls. The town’s election officer Jesus Gaston said they have 5 extra VRVMs to replace the defective ones, and stressed that the voters would still be able to vote even without the machines thanks to their computerized voters list. (READ: Glitches in new voter registration verification machines delay voting in some precincts) 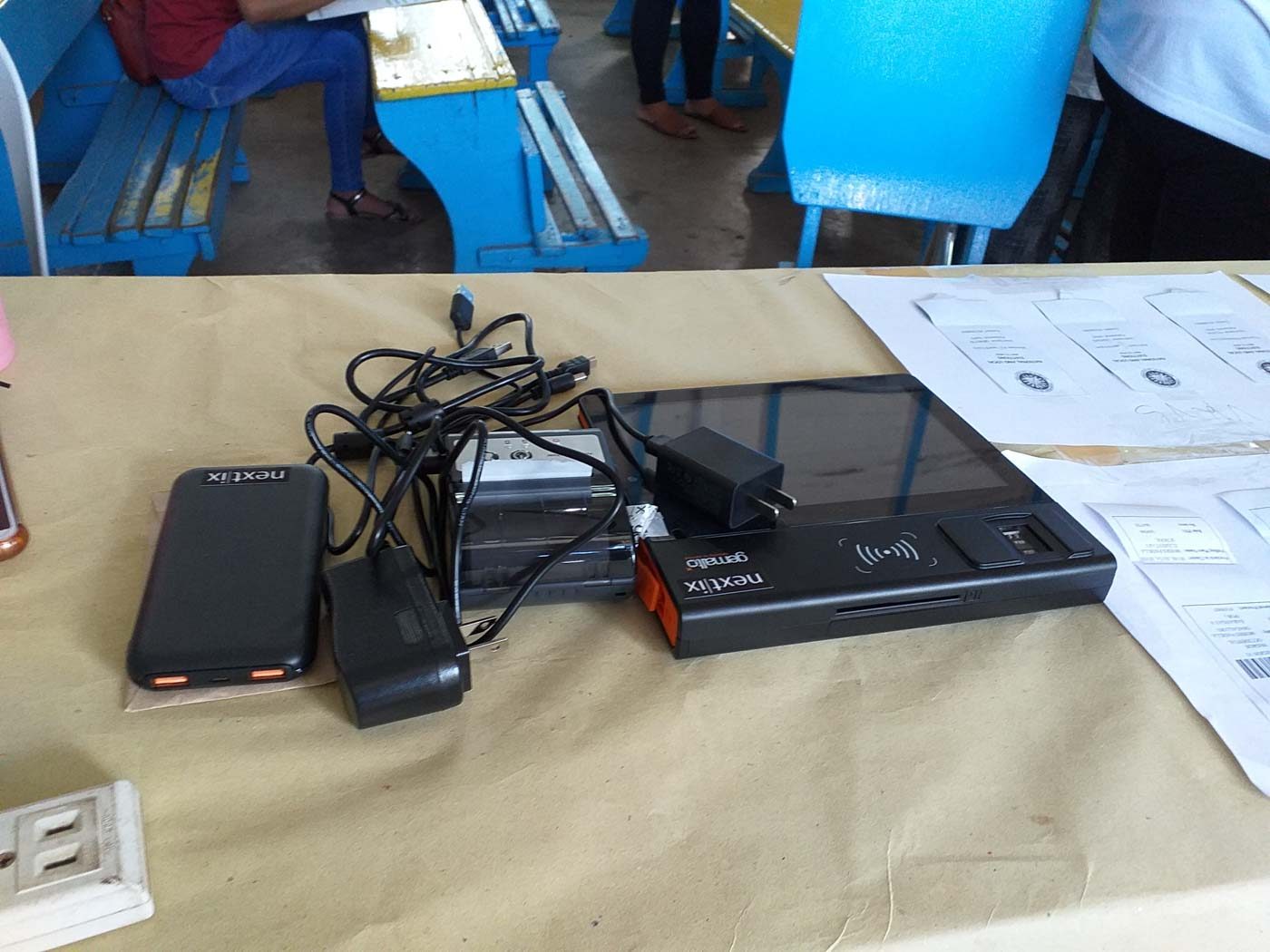 – with reports from Marchel Espina/Rappler.com