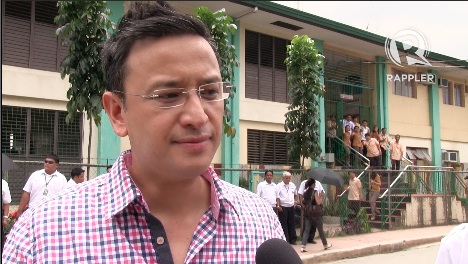 MANILA, Philippines – Is the President who champions good governance guilty of the politics of addition?

NP is headed by Aquino’s bitter rival in the 2010 presidential race, Sen Manny Villar. The LP and Aquino then accused Villar of corruption and being the secret candidate of former President Gloria Macapagal-Arroyo.

Lacierda told reporters, “Campaigning is campaigning. There [were] words that were exchanged during that time but we move on for the sake of the country.”

In defending the talks between the LP and the NP, Lacierda cited a 2009 Senate resolution expressing the sense of the Senate to dismiss the ethics complaint against Villar on the controversial C-5 road double insertions issue.

Aquino’s spokesperson also denied that the talks are related to the Senate vote to convict former Chief Justice Renato Corona.

“Just to also let you know, Senator Bongbong Marcos is also with the Nacionalista Party and he voted to acquit Mr. Corona. So it was really based on individual decisions and conscience.”

In an interview on the sidelines of the launch of Project Noah, Quimbo told Rappler that the NP and NPC formed a coalition with the LP in the House of Representatives after the 2010 polls.

Asked about Aquino and Villar, Quimbo said, “Isn’t that the story of Philippine politics? It’s about addition but I think what the President wants is genuine addition.”

Quimbo cited the Sin Tax bill, oil deregulation and land reform as contentious initiatives where the President will need coalition allies in Congress.

“We need to be able to accommodate and find a place where these allies supportive of the President can also have a place in the senatorial lineup. After all, it is going to be the administration lineup.”

He said he does not see any conflict between the LP and the NP.

“I think your loyalty to the party should end as soon as you start serving that public office and that goes for Senator Villar or whoever that’s why we’ve always been together in terms of programs.”

Another Aquino ally, former Akbayan Rep Risa Hontiveros-Baraquel, also downplayed possible conflicts between the LP and the NP. The President has named Baraquel as a senatorial candidate of the administration in 2013.

For Baraquel, what matters is that the NP and NPC should support Aquino’s reform agenda.

“If the NP will support the President’s anti-corruption and poverty alleviation [programs] like what Akbayan does, maybe it’s not just politics of addition but added practice in principled politics. In elections, it’s not just the numbers that are important but your commonalities,” Baraquel said in Filipino.

She added, “In any human endeavor, there is potential conflict especially in Philippine politics but the coalition politics that Akbayan pushes for is one where different parties, though with different long-term visions, can come together in an important exercise like the 2013 midterm elections to promote a specific reform agenda.” – Rappler.com