Poe has ‘other views’ on teaming up with Roxas 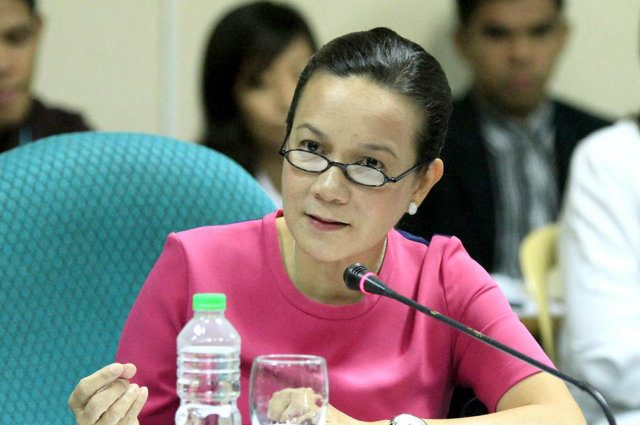 Facebook Twitter Copy URL
Copied
'I also have other views about issues that I cannot say we need to be together to achieve these kinds of objectives,' says Senator Grace Poe about Mar Roxas

MANILA, Philippines – Senator Grace Poe hinted that Interior Secretary Manuel “Mar” Roxas II offered her to become his running mate, but she said that she has differences with the presumptive administration standard-bearer.

In a long, cryptic interview with reporters, the neophyte senator being eyed as a viable 2016 presidential bet said that she and Roxas bumped into each other in a restaurant last week. In that meeting, the two discussed their election plans.

The independent senator implied that Roxas wants to run for president under the ruling Liberal Party (LP), and asked her to be his running mate.

(It is more clear to me now what Secretary Roxas plans to do. Sometimes when we meet, he mentions that it is better for us to be together.)

Asked if she asked Roxas to clarify how the team-up would look like – whether it’s Roxas-Poe or Poe-Roxas, as some groups in the administration are pushing – the senator said: “Hindi na lang. Sa tingin ko, desidido na siya kung ano ang kanyang itatakbo.” (I opted not to ask. I think he’s decided on what position to seek.)

No followup talks with Aquino

Poe said that for her to run with Roxas, the two of them should have the same views on issues, and confidence in each other.

(What should be my answer? What I told him, of course, is that there are many things we have in common. For example, we both want to continue the fight against corruption but for now, I also have other views about issues that I cannot say we need to be together to achieve these kinds of objectives.)

Poe’s 2016 plans have piqued the curiosity of politicians and political observers because of her strong survey showing. Ranking second to Vice President Jejomar Binay, the senator of two years is viewed as the only possible candidate who can beat the opposition candidate facing multiple corruption allegations.

Speculation about a possible tandem between Poe and Roxas was rife after President Benigno Aquino III disclosed in early May that he talked to Poe about possibly drafting her as a candidate for higher office in 2016. Poe later said that Roxas was present in the last part of that May 5 meeting in Malacañang.

The meeting fuelled that Aquino preferred endorsing Poe for president over LP’s president-on-leave, who has been lagging behind in surveys.

Yet on Monday, May 25, the President said Roxas remains “at the top of the list” of the administration’s possible presidential candidates. A day later, the secretary said he was ready to continue Aquino’s “straight path” or anti-corruption crusade.

While Poe initially said she was set to meet Aquino again, now the senator admitted that the chairman of the LP did not call her for another meeting.

“Hindi na ako pinatawag ulit ng Pangulo. Marahil ay abala rin siya at maraming ginagawa,” she said. (The President did not call me again for a meeting. Perhaps he is also busy, and is doing many things.)

Poe-Chiz ‘possible even without party’

Poe also gave statements seemingly distancing herself from Aquino and the LP, and leaning toward running with her close friend and mentor, Senator Francis Escudero.

The senator said that she is still “praying over” the decision of whether or not to seek higher office but added that she wants to remain independent.

A former Aquino appointee in the censors board, Poe ran under the LP’s Team PNoy slate in 2013 but she never joined the party. She emerged as the surprise front runner, riding on the popularity of her late father, actor Fernando Poe Jr.

(I continue believing that even if I have high regard for our President, I remain independent because that is the reason I am here. The people voted me, not the parties who carried my name.)

Poe added that while she believes in the administration’s anti-corruption campaign, it failed to address the needs of the poor. “Napag-iwanan din ang ating mga kababayan na nangangailangan.” (Our countrymen in need are being left behind.)

The senator reiterated that she was more comfortable with Escudero than Roxas.

In a separate interview, Escudero said it was possible he and Poe will both run as independent candidates, without the machinery and resources of a political party.

(If we analyze it, everyone who ran for president and won, his or her party did not have enough numbers to support their candidacy. That comes only after the support from our fellow Filipinos. So if the question is: is it possible, then it’s possible, and that happened in our history.)

If their tandem pushes through, Escudero said it was clear that he would run for vice president while Poe will aim for president. He admitted that he and Poe talk about this possibility.

On the question of their lack of resources, Escudero quoted a line from the movie Field of Dreams.

“’If you build it, he will come.’ But it’s hard to hold on to that for now, especially in a serious race, and serious candidacy in 2016 for higher office,” he said.

Escudero also disclosed that Poe asks him about possible election scenarios. “Our discussion gets deeper also because many of our countrymen want her to run in 2016.” Aquino is set to announce the administration candidate after his State of the Nation Address on July 27.

Political analysts said that the confusion on whether Roxas or Poe will run for president reveals the LP’s weakness in fielding a challenger to Binay’s presidential bid.

Binay refused to disclose if he and Estrada talked politics. “Nakikain at nakipag-hi nga lang ako kay Presidente. Miss ko na iyong jokes nito eh.” (I just dined with and said hi to the former President. I miss his jokes.)

Asked about the Roxas-Poe uncertainty, Binay said: “Ah, problema na nila iyon. Sila iyong nagde-decide doon.” (Ah, that is their problem. They are the ones who will decide on that.) – Rappler.com