Jun 6, 2015 9:25 AM PHT
Chay F. Hofileña
Facebook Twitter Copy URL
Copied
Estrada is known to be dead set on seeking re-election as mayor of Manila. He had also given his blessings to his 2013 running mate, Manila Vice Mayor Isko Moreno, to aim for the Senate. 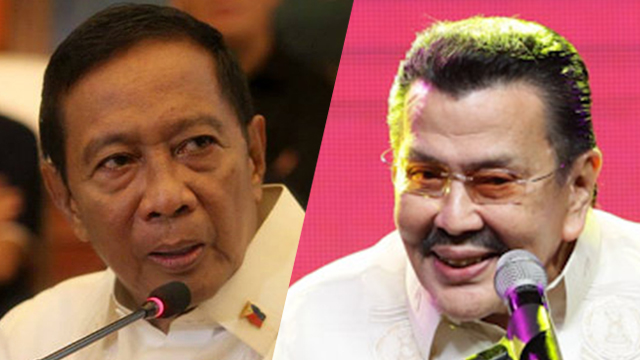 MANILA, Philippines – Former president and current Manila Mayor Joseph Estrada was taken aback by an offer made by Vice President Jejomar Binay for Estrada to run as his vice president, Rappler learned.

Manila City Hall insiders said the offer was made on Wednesday, May 27, the day Binay went to City Hall to have lunch with Estrada. The Vice President brought with him his children – Makati Mayor Junjun Binay and Senator Nancy Binay – and United Nationalist Alliance (UNA) interim president Toby Tiangco.

That visit initially prompted speculations that the Vice President was trying to clinch an endorsement from the Manila mayor and opposition leader. Like tiptoeing around egg shells, Estrada, however, evaded persistent questions from the media about who would get his blessings as presidential candidate.

It’s “too early to predict anything,” Estrada said on TV when asked if he would still go for Binay in the event Senator Grace Poe declared she was running for president. This happened before the Binay camp went on the offensive and questioned the qualifications of Poe, raising issues related to residency and her citizenship.

City Hall insiders said Estrada was surprised by Binay’s offer because it was a slide down from his perch as former president. In 2010, Binay ran as Estrada’s vice president and won. Estrada lost to Benigno Aquino III by a margin of 5.7 million votes.

Three years later, Binay’s party then, the Partido Demokratiko Pilipino-Lakas ng Bayan (PDP-Laban) and Estrada’s Partido ng Masang Pilipino (PMP) merged to form UNA and field common candidates in the 2013 senatorial polls. UNA announced in September 2014, that the coalition would be turned into a political party that would serve as Binay’s vehicle for his presidential bid in 2016.

As early as January of this year, Binay did not discount the idea of a Binay-Estrada team-up for 2016.

In an interview in Biliran on Friday, June 5, he resurrected the idea and confirmed the possibility of a Binay-Estrada tandem. “Hindi na Erap-Binay, Binay-Erap na. Yun ang tawag doon, ‘BEST’.”

When asked if Estrada was amenable to be his running mate, Binay ventured a cautious, “Sa tingin ko.” (I think so.)

What about Isko Moreno?

During the City Hall meeting, however, Estrada – unsure about how to react to his offer – told Binay to wait awhile and wait for other possible candidates. Estrada is known to be dead set on seeking re-election as mayor of Manila. He had also given his blessings to his 2013 running mate, Manila Vice Mayor Isko Moreno, to aim for the Senate.

Moreno had run a series of political ads on television, reportedly with the support of Estrada. It would be difficult for Estrada to backtrack and say he would be seeking a national position – as it would mean Moreno running as Manila mayor instead, and giving up his ambitions for the Senate.

Binay said he had tasked Tiangco to head a search committee that would find him a running mate. They seem to be having a hard time choosing one, however, given the string of controversies involving Binay, foremost of which is the plunder complaint lodged against him in connection with an overpriced Makati City Hall Parking Building project.

On Sunday, May 31, Binay again paid Estrada a surprise visit at his Polk residence in Greenhills. He was accompanied by his son Junjun, but there was no talk about the previous offer made in City Hall.

Estrada, who ranks third and is tied with Davao City Mayor Rodrigo Duterte in latest presidential preferences surveys, has been put on the spot by Binay. The Vice President said they would be together in the opposition in 2016, especially if Poe – the daughter of Estrada’s bosom friend, actor Fernando Poe Jr – ran under the administration ticket.

Poe, in the May 8-18, 2015 survey of Laylo Research Strategies, ranked a very close 24% to Binay’s 28%. She has yet to declare if she will be seeking the presidency, but was apparently irked by the eligibility issues raised against her by Tiangco. Poe said on Wednesday, June 3, she was being pushed close to a 100% decision to run.

She has said she does not see herself running with Binay, pointing to the importance of honesty and openness to public scrutiny among leaders. It was a jab at Binay’s alleged corruption and refusal to appear before the Senate. Previously, Binay said experience and competence were key attributes of leaders who should be elected in 2016, apparently alluding to the neophyte senator.

Poe, who rated 29% as a preferred vice presidential bet in Pulse Asia’s March 2015 survey, led the pack of other possible candidates that included her close ally Senator Francis “Chiz” Escudero, who came in a far second at 16%, and Senator Alan Peter Cayetano who got 13%. In the later Laylo survey, however, Escudero kept his numbers at 16% compared to Poe’s 23%.

It is this strong showing of Poe that has made her a highly desired running mate of other presidential aspirants, who include presumed Liberal Party (LP) presidential bet Manuel “Mar” Roxas II.

If Poe allies herself with the LP, Estrada may be forced to take on an opposition stance and align himself with Binay. If she seeks the presidency, it would be tough to run as an independent without a party machinery that could help her guard her votes. It would be easier for her, however, to court Estrada’s support.

Estrada continues to have a strong hold over the poorest voters after Binay. Running in tandem with him would consolidate Binay’s vote among the classes D (moderately poor) and E (very poor), which constitute the majority of Philippine voters.

If Estrada decides to stay out of the presidential contest, Binay will likely inherit Estrada’s supporters. By offering him the VP post, Binay is also making sure Estrada is not titillated by the thought of running for president, a position supposedly long reserved for the Vice President as opposition leader.

The big question, however, is if the former president will have the heart to turn his back on the adopted daughter of his dear friend who passed away in 2004 after losing his presidential bid. – Rappler.com