No agreement in final Aquino-Poe meet 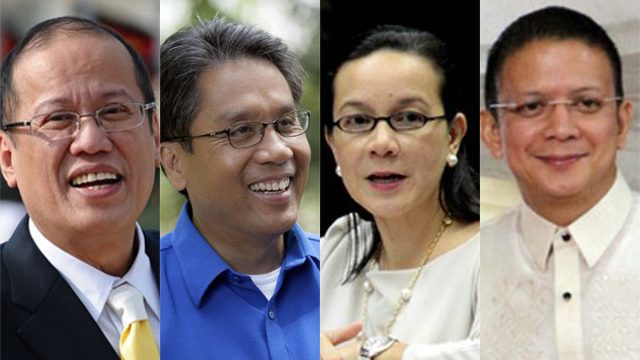 MANILA, Philippines (UPDATED) – A week ahead of President Benigno Aquino III’s self-imposed deadline to declare his chosen presidential candidate for the 2016 election, he met one-on-one with Senator Grace Poe for 5 hours on Monday, July 20. They failed to reach an agreement.

In a statement Monday night, Poe said the meeting could be the last conversation between her and the President before his last State of the Nation Address on July 27.

“I could sense the very difficult position PNoy is in right now,” the neophyte senator said. “I understand and sympathize with his predicament and situation. I consider him a true and sincere friend and he has my utmost respect,” Poe said in a statement.

Poe hinted at a parting of ways.

“He reiterated his desire for all of us to continue working together and that he believes that, like him, we can and will do what is best for our country,” she said. “In the end, we both agreed to continue, in whatever capacity, striving and working for our countrymen and for the betterment of our children’s future.”

The President has spent months choosing between Poe and Interior and Local Government Secretary Manuel “Mar” Roxas II to be the standard-bearer of the ruling Liberal Party which Aquino himself heads. (READ: #AnimatED: Spectacle of Aquino indecision)

Asked if Poe’s statement meant that the President had chosen Roxas, an LP stalwart told Rappler: “It looks like it’s Mar [Roxas] but I don’t know about Senator Poe.”

The LP’s position is for Poe to run as Roxas’ running mate. But Poe’s supporters within the ruling coalition have balked at the idea, citing her survey numbers.

Aquino has held separate meetings with the two.

Last week, Aquino hosted a dinner meeting with both camps. But the meeting did not yield anything concrete.

Roxas is lagging behind Poe and Vice President Jejomar Binay in presidential preference surveys. Poe is now the frontrunner in the surveys, the main reason why some Aquino allies and relatives are pushing for him to endorse her instead.

She topped the 2013 senatorial elections under the ruling coalition.

Asked to elaborate on her statement, Poe said in a text message to Rappler that she and the President “both agreed that [they] both have the best interest of our country in mind in whatever decisions [they] will make in the coming days.”

On Saturday, July 18, Poe and Senator Francis Escudero attended a local festival in Koronadal, South Cotabato, sparking talks that the two are indeed running as a tandem. (READ: Poe: Inexperienced? I’ve been learning since childhood)

Businessmen, sectoral groups as well as politicians from the ruling coalition have been encouraging Poe to run for president. Her father, the late actor Fernando Poe Jr, ran for president in 2004 but lost to Gloria Macapagal-Arroyo, who was accused of rigging the vote.

Earlier in the day, Roxas was in Zamboanga City. In a lengthy interview with the media, Roxas reiterated statements he’s made in the past: that as a member of the ruling party, he will pursue “Daang Matuwid (Straight Path),” the Aquino administration’s slogan for its transparency, anti-corruption and good governance platform.

(Do your job right, do it in the right place and our countrymen will take notice. You don’t need to make a political somersault, or resort to political gimmicks.) – with reports from Bea Cupin/Rappler.com