Lines were clearly drawn at the PDP-Laban national assembly on Saturday, July 17. There can now be no doubt that President Rodrigo Duterte recognizes the faction led by Energy Secretary Alfonso Cusi and is challenging Senators Koko Pimentel and Manny Pacquiao, and the party “originals” they represent.

In the same meeting, the Cusi group elected new officers, replacing Pimentel and Pacquiao, who took their oath in the presence of Duterte.

It seems inevitable that the groups will now have to legally settle who the Commission on Elections (Comelec) will recognize as PDP-Laban in the run-up to the filing of candidacies in October.

“We do not know what the other side will do. Maybe Koko is already typing a petition for Comelec,” said Duterte on Saturday.

He is fully expecting Pimentel to “fight nail and tooth” for the right to be called the real PDP-Laban.

Next month, on August 15, political parties must have submitted their Sworn Information Update Statement, which, among other things, lists down the party’s officers.

But now, there are two sets of officers. Which will the Comelec recognize? The officers with the backing of Pimentel, a founding member of the party, or the officers sworn in by Duterte himself? 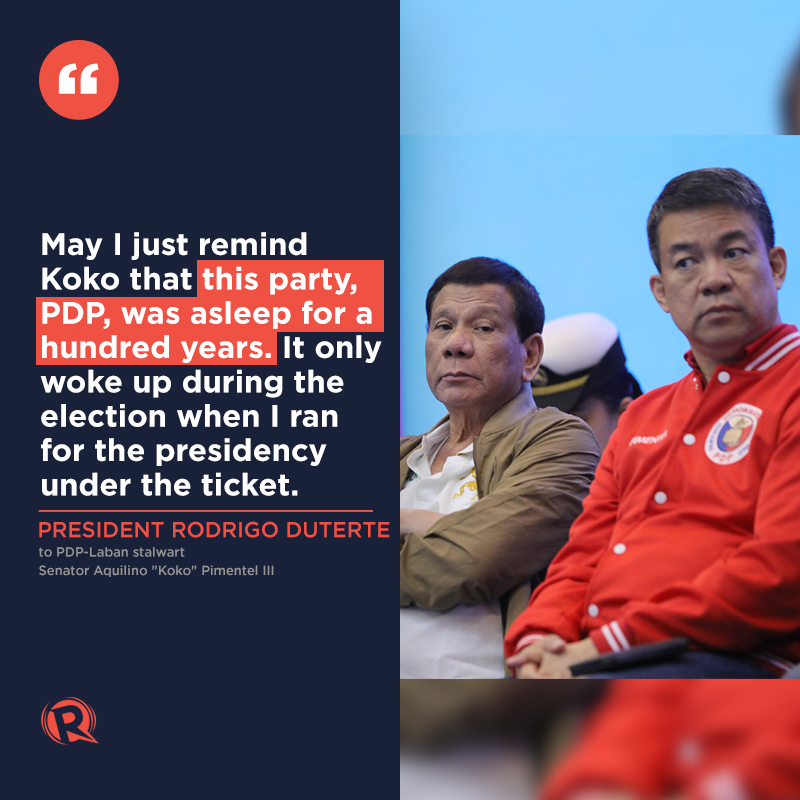 President Rodrigo Duterte, whose presidential bid was made possible by PDP-Laban allowing him to run as their standard-bearer, said the party owes him a lot.

Pimentel held a simultaneous Zoom meeting with some 100 chapter leaders nationwide, as well as other “bona fide and original grassroots members of the party.”

The founding member and son of the founder, the late Senate president Aquilino “Nene” Pimentel Jr, reminded members to stay united behind the leadership of Pacquiao.

Duterte, whose presidential bid was made possible by PDP-Laban allowing him to run as their standard-bearer, also said the party owes him a lot.

Pacquiao-Pimentel camp: Assembly has ‘no force and effect’