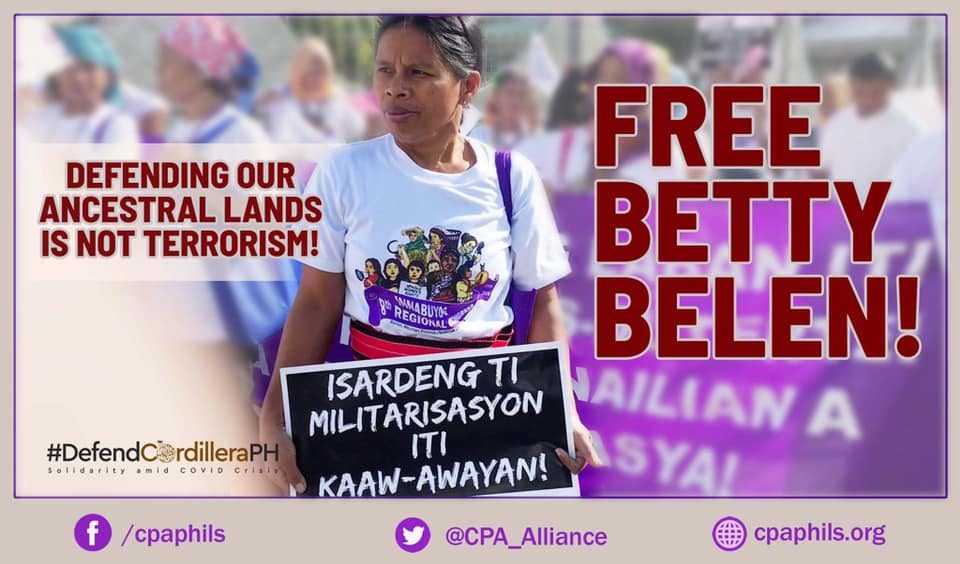 A Gabriela official was arrested in a Cordillera town on Sunday, October 25, for illegal possession of firearms and explosives – a charge rights advocates said were “fabricated” after she was red-tagged by the military.

According to a report from the Kalinga Provincial police obtained by Rappler, Gabriela Cordillera council member Beatrice “Betty” Belen was arrested for possession of 3 rifle grenades in Barangay Uma in Lubuagan, Kalinga.

Belen was placed under the custody of the local CIDG and is set to face complaints for illegal possession of firearms and explosives.

Rights group Karapatan said Belen is a victim of red-tagging by the military before she was arrested. Soldiers allegedly told people in Kalinga that Belen was working for a front of the Communist Party of the Philippines and the New People’s Army.

Gabriela is a left-leaning women’s rights group but it is not revolutionary.

“The recent arrest of Beatrice Belen is a very clear example of the dangers of red-tagging, resulting in violations to the right to life, liberty, and security of human rights defenders,” said Karapatan Secretary General Cristina Palabay.

Belen’s arrest came after the military, led by Lieutenant General Antonio Parlade Jr, went on a red-tagging spree out of celebrities that triggered condemnation against its propaganda methods for its goal to tend the local communist insurgency, which is the oldest in Asia.

“The Duterte administration’s contempt for women human rights defenders, both publicly-known personalities such as journalist Maria Ressa and Senator Leila de Lima and those who work in communities, is shown through its harmful and sexist rhetoric, including red-tagging, and through judicial harassment by way of trumped-up charges,” Palabay added. – Rappler.com