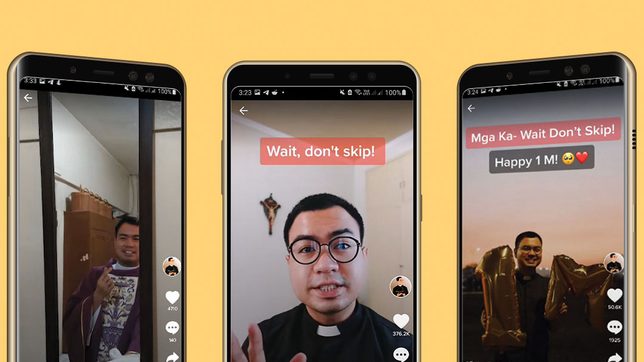 'FATHER TIKTOK.' Father Fiel Pareja, 30, is one of the most popular TikTokers in the Catholic Church.

For someone scrolling through TikTok seeking mindless fun, seeing a priest in clerical garb holding a Bible might be enough to instantly swipe up and ignore a video

Father Fiel Pareja knows this, so he usually begins by pleading to his mostly young audience not to skip. More than a million followers later, it seems that his message has found a way to stand out despite the app’s ceaseless parade of content.

At first Pareja did not pay much attention to TikTok. Aside from the app’s perceived “stigma” as “corny” and frivolous, he knew that priests are still expected to appear respectable in public.

“In our country, na alam mo naman we are not used na makakita ng pari na sumasayaw, na nagli-lip-synch. Parang it’s a taboo – parang malaking kasalanan, na dapat nasa pulpit lang, nagmimisa lang (In our country, you know that we are not used to seeing priests who dance, or lip-synch. It’s as if it is taboo, a big sin. A priest is expected to be preaching in the pulpit, saying Mass),” the 30-year-old Catholic priest said.

But just like many Filipinos bored of the seemingly endless lockdown, Pareja decided to give the app a try.

TikTok is a video-sharing and editing app which lets users create their own content by using a variety of songs, filters, and effects. The app can overwhelm many, but for Gen Z digital natives, it has become a wildly-popular platform for unleashing their creativity and connecting with peers from around the world. A report from the iPrice Group revealed that TikTok is the Philippines’ top downloaded entertainment app at the iOS app store for much of 2020.

Pareja started riding on trends, such as the “Wipe it Down” challenge, which he used to showcase various clerical vestments. He also duets with other popular “TikTokers” such as Marvin Fojas.

But what gets the most views are his daily 90-second Bible reflections, which are reassuring and uplifting in tone. Users comment by either asking questions of faith, or prayers ranging from healing their sickness to just finishing their online modules. He then posts videos of him answering their questions and praying for his followers’ common intentions.

Since starting in May 2020, Pareja now has more than 1.1 million followers and 20 million likes. Some have already called him “Father TikTok,” a nickname he has learned to embrace. His videos are also cross-posted on his Facebook and Instagram.

Pareja says he is surprised with the reception, but says that his videos gain traction simply because people can relate.

“I personally believe na itong… Word of God becomes viral because it is very personal sa mga tao, how they encounter the Lord with their personal experience in the light of their faith.”

Pareja’s social media ministry started when he decided to spend his year off seminary to work in the BPO industry, where he was assigned the graveyard shift.

Aside from not getting enough rest, Pareja says that most of his coworkers had no time to pray. He then decided to create a closed Facebook group for them. Here, he posts short reflections to aid his friends in prayer even just for 5 minutes.

Later, he decided to make the page public. Now known as SpeakLord, the page currently has more than 340,000 likes. (He also manages a similar-themed page in Kapampangan called Sasalpantaya Ku, which has more than 66,000 likes.)

Such encounters propel Pareja’s work. “How can I be a good pastor if I do not know the experience of my people? Kung gusto kong maging makabuluhan ‘yung aking pangaral, maganda mismo na ako ay bumabad sa karanasan ng mga tao.” (If I want my teachings to be relevant, I should immerse myself to their experiences.)

He wakes up at 5:30 or 6 am to prepare for his day job as parochial vicar of Immaculate Conception Parish in Angeles City. Only when he finishes his pastoral work at 8 to 10 pm can he start recording and editing his content. For a typical 45- to 90-second TikTok, Pareja would usually do 20 to 30 takes. Pareja shoots on his own, and since he says he is not good at editing, he would redo the whole video if he makes a mistake. He does this daily, and sleeps at around 2 or 3 am.

Pareja, who was ordained priest only in 2020, also considers the short-attention span of his young audience as a “challenge” in conveying God’s Word.

Despite this, Pareja seems to have committed to his ministry for the long haul. From his own savings, he has managed to upgrade his phone and buy a new camera and ring light.

“These are all not for myself, but for the people who will receive the word of God,” he said.

While the Inter-Agency Task Force on Emerging Infectious Diseases (IATF-EID) has already relaxed restrictions for places of worship by allowing 50% capacity in areas under general community quarantine, some may still prefer to mark Lent safely at home now that more infectious COVID variants are circulating.

Given that church celebrations this year – including the 500th anniversary of Christianity’s arrival in the Philippines – will still likely be held online, Pareja hopes that parishes can give more support to their social media teams by allocating funds, giving them training, and helping them upgrade their equipment. 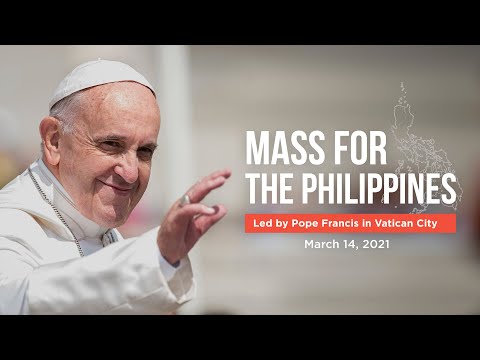 He says that the fact that some youth volunteers spend their own money to buy load for data to livestream masses, and lend their own cameras should serve as a “wake-up call.”

Tasked with this “mission,” Pareja does not think he can abstain from social media this Lent, a time when Christians are usually urged to log out and reflect more.

“Social media is a gift from God. These applications were talents given by God who created them. Let us use them to spread Good News, not fake news,” he said.

Instead, he plans to set aside Fridays as his “days of service,” visiting the sick and informal settlers, and hearing confessions.

For the rest of us, he gives this advice: “If social media becomes a hindrance or it disturbs you already, I go for bawasan mo ‘yung social media mo.”

“If you are watching videos that inspire you or help you to become the better version of yourself, then why stop? Parang ganoon. Depending on the purpose and the intention of the one who is using the application. So if it is meaningful for you, continue. If it helps you, continue.”

As early as now, Pareja is already planning his videos for Holy Week. His possible theme? “God-with-us.”

“He is true to his name: God-with-us, even this season of Lent. Lahat naman araw-araw, andiyan siya: a God who suffers with us, a God who provides healing for all of us, a God who gives us strength during this difficult time, and a God who is love.” – Rappler.com