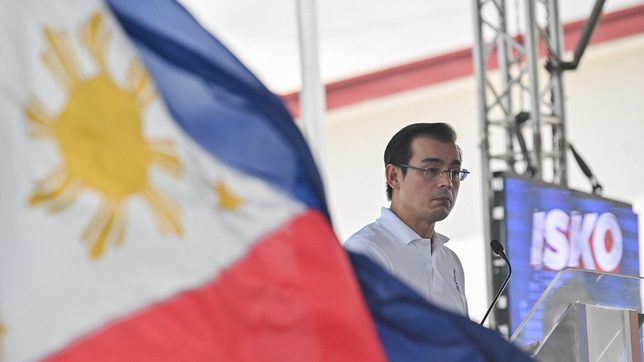 TANDEM. Manila Mayor Isko Moreno and Doc Willie Ong declare their bid for president and vice president in the coming May 2022 polls during an event at the Basecommunity housing project in Tondo, Manila on September 22, 2021.

Facebook Twitter Copy URL
Copied
(1st UPDATE) 'I will work with anybody,' says the Manila mayor, in a speech also riddled with criticisms of the Duterte government

Isko Moreno will “work with anybody,” from all shades of the political spectrum for the betterment of the Philippines, he promised as he launched his 2022 presidential bid from his birthplace of Tondo, Manila on Wednesday, September 22.

Wearing a neutral white shirt and a winning smile, Moreno sought to present himself as a politician who would end divisive politics that has defined discourse during the Duterte administration.

Also launching his vice-presidential bid at the event was Moreno’s running mate, doctor Willie Ong, a political neophyte with one failed senatorial bid behind him but a sizeable social media following. (READ: Who is Doc Willie Ong, Isko Moreno’s VP?)

“I will form the broadest form of government with the best and brightest at its helm. Not just those from Manila, or from one party, or from one faction, or one profession, or one tribe, or one age group,” he said in Filipino.

He said he would not fixate on finding someome to blame for problems the country will face.

“We can only move forward on our road to recovery if we are not consumed and immobilized by the rear view mirror politics,” said Moreno.

(Everything President Duterte started under Build, Build, Build that is good for the people, already started… our countrymen can rest assured we will continue them.)

The 46-year-old presidential aspirant also promised to be a consultative leader who listens to both suggestions and criticisms.

He said he would institute an “open governance” policy, similar to his first executive order as Manila chief, in which citizens can relay suggestions straight to his office. For his campaign bid, he said he is accepting suggestions and comments on his plans and platform.

“I will welcome criticism, because the value in listening to complaints is that they lead to better policies and improved services,” said Moreno.

He promised to put competent people in powerful positions, and not base such appointments only on loyalty or personal ties, as was a criticism hounding Duterte during his entire presidency.

“A leader should not only think outside the box, he must also choose people outside his circle. A leader who does not inspire the best among us to serve in government ends up surrounded by the least among us who end up ruining the government instead of running it well,” said Moreno.

Moreno, relatively young for a presidential candidate based on the country’s history, wants young Filipinos to flock to his administration if he wins in 2022.

“To energize our bureaucracy, I will be inviting millennials to join their government so they can put their talents in the service of their fellow countrymen,” he said.

While Moreno presented himself as a unifying candidate and did not once mention President Rodrigo Duterte’s name, he made several jabs at the current administration, from criticizing its pandemic response to poking fun at the Chief Executive’s latenight speeches.

“We’ve been under quarantine for 557 days, but instead of flattening the curve, we have flattened our economy. Yet, many people continue flatlining in hospitals,” said Moreno.

In a Rappler Talk Newsmaker interview the day before his launch, Moreno explained in more detail his pandemic recovery plan.

He said he only does “real talk” and never plays “coy” when discussing city projects or personal beliefs. He said he doesn’t lie or play games about things like declaring electoral candidacies.

Duterte, in 2016, had repeatedly claimed he was not seeking the presidency, only to file as a substitute candidate for his political party at the last minute to make way for his presidential bid.

Even now, the President makes conflicting messages about his 2022 plans.

“I will not spend nights rambling on senseless thoughts that will get you agitated,” said Moreno, a likely reference to Duterte’s long speeches aired late at night where he attacks critics or praises allies while holding a meeting supposed to be focused on pandemic response.

Moreno, son of a stevedore and laundrywoman, emphasized that he is not part of a big political clan and can’t claim a famous surname.

(You won’t find in peso bills the faces of my penniless ancestors. No avenues named after them. Not even an alley or waiting shed bears the name Domagoso.)

“I have pulled myself out of the gutter with no Daddy Warbucks helping me along,” he added. (READ: Isko Moreno: From the slums of Tondo to Manila’s throne)

Moreno, who is running under Aksyon Demokratiko, is the third person to launch his presidential bid. He was preceded by Senator Manny Pacquiao of a PDP-Laban faction and Senator Panfilo Lacson of Partido Reporma. – Rappler.com