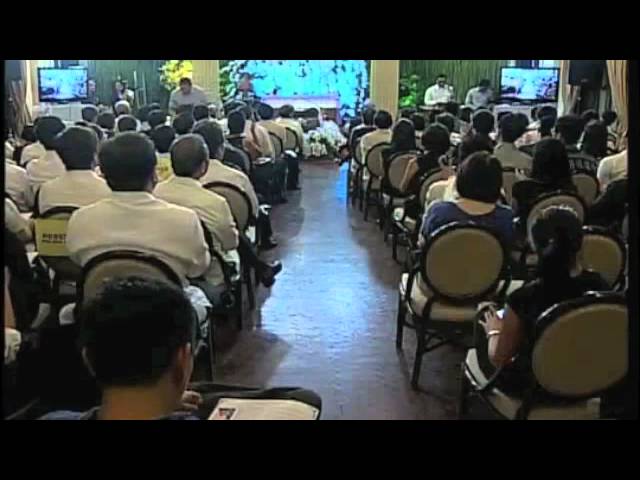 MANILA, Philippines – The men and women of the Palace gathered Saturday evening, August 25, to honor a simple man who reminded them to connect with the poor whom they serve.

One of them said the late Interior Secretary Jesse Robredo was at home in his tsinelas, or ordinary man’s slippers, even when discharging his official duties as Cabinet secretary.

In his eulogy for Robredo, Energy Secretary Rene Almendras remembered Robredo for his brand of “tsinelas leadership.”

He recounted a time, for example, when Robredo was at the National Disaster Risk Reduction and Management Council headquarters to respond to flood. Robredo did not wear boots unlike the others; he wore a simple tsinelas.

“Pare, ito ang tamang pambaha footwear. Karamihan sa mga kababayan nating nababaha, nakatsinelas,” the late secretary said, as recounted by Almendras. (Friend, this is the right footwear for flooding. Most of our countrymen who experience flooding wear the tsinelas.)

This shows Robredo’s simplicity and ties with the masses, Almendras said.

Almendras’ recollection also resounds with that of Robredo’s daughter, Aika. In an award-winning essay, Aika said her father is known to do even menial tasks, like shoveling mud after floods.

“Tsinelas leadership is the willingness to wade in the flood, willing to go where you normally do not go, to the most remote areas, just to be with the most disadvantaged people. We all know Sec Jesse rarely said no; that was why he was one of the most traveled Cabinet members,” Almendras said in a mix of English and Filipino.

“We’re here in Malacanang, we’re here in Kalayaan Hall. Look around you. This place was not designed for tsinelas, and yet last night, and throughout most of the day, how many thousands of slippers came into this room to pay tribute, to pay homage and honor to Sec Jesse?” Almendras said.

“Naiilang lumapit ang nakatsinelas sa nakabarong. (Those who wear the tsinelas feel shy to approach those who wear the barong.) Leaders must be accessible to those they serve; that was Sec Jesse Robredo,” he added.

In casual Robredo fashion, Cabinet officials loosened up in their tribute to the late secretary. They sang – the way Robredo would like them to honor him, according to them.

“Sec Jesse would have wanted tonight’s tribute to be informal and casual, because that was Sec Jesse,” Almendras explained.

They began their tribute with the song “Impossible Dream,” and at another point of the program, sang “My Way,” reportedly Robredo’s favorite song. They ended it with “Betcha by Golly, Wow,” which, according to the Palace, was the theme song of Robredo and his wife Leni.

Their song numbers cheered up Leni, who laughed along with the audience composed of Robredo’s closest relatives and friends.

It was the last day of the public viewing of Robredo’s body in Malacañang. His body is scheduled to be returned to Naga City on Sunday, August 26, and is set to be buried on Tuesday, August 28.

Here’s the schedule of Robredo’s funeral.