Maria Ressa, other journalists named Time 'Person of the Year'

NEW YORK, USA (7th UPDATE) – Saudi journalist  Jamal Khashoggi, who was murdered in October at his country's Istanbul consulate, was on Tuesday, December 11, named Time magazine's "Person of the Year" alongside several other journalists under siege in their respective countries.

The magazine also honored Rappler CEO Maria Ressa of the Philippines, Reuters reporters  Wa Lone and Kyaw Soe Oo – currently imprisoned in Myanmar – and the staff of the Capital Gazette in Annapolis, Maryland, including 5 members killed in a June shooting.

Time dubbed them "The Guardians" – a collection of journalists from around the world who faced challenges in the past year – "for taking great risks in pursuit of greater truths, for the imperfect but essential quest for facts, for speaking up and for speaking out."

Khashoggi, who wrote for the Washington Post, was a critic of the Saudi royalty. Lone and Soe Oo were thrown into jail by the Myanmar authorities for reporting about the atrocities against the Rohingya.  The Capital Gazette office in Annapolis, Maryland was attacked by a gunman in June 2018.

"As we looked at the choices it became clear that the manipulation and abuse of truth is really the common thread in so many of this year's major stories, from Russia to Riyadh to Silicon Valley," Time editor-in-chief Edward Felsenthal said.

"So we chose to highlight four individuals and one group who have taken great risks in pursuit of greater truth, starting with Jamal Khashoggi."

In its piece "The Guardians and the War on Truth" about the 2018 Person of the Year honorees, Time said: "in a world where budding authoritarians have advanced by blurring the difference (between tyranny and democracy), there was a clarity in the spectacle of a tyrant’s fury visited upon a man armed only with a pen. Because the strongmen of the world only look strong. All despots live in fear of their people. To see genuine strength, look to the spaces where individuals dare to describe what’s going on in front of them."

About Ressa, the article said: "In the Philippines, a 55-year-old woman named Maria Ressa steers Rappler, an online news site she helped found, through a superstorm of the two most formidable forces in the information universe: social media and a populist President with authoritarian inclinations. Rappler has chronicled the violent drug war and extrajudicial killings of President Rodrigo Duterte that have left some 12,000 people dead, according to a January estimate from Human Rights Watch. The Duterte government refuses to accredit a Rappler journalist to cover it, and in November charged the site with tax fraud, allegations that could send Ressa to prison for up to 10 years."

Time, which has awarded the "Person of the Year" title annually since 1927, published 4 different magazine covers for this week's edition, each one spotlighting different honorees.

It is the first time someone has been chosen posthumously for the prestigious cover. 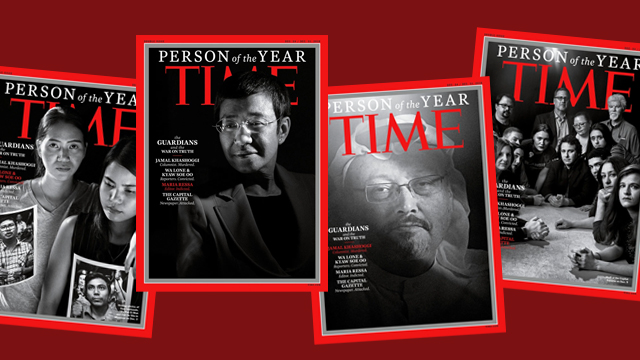 In an interview on CNN on Tuesday night shortly after the announcement, Ressa said the recognition was "bittersweet."

"It's daunting, right? Look at the challenges that we are facing, and the other 3 who are named in this," she said. Ressa also recounted that earlier Tuesday, she had just posted bail for tax evasion charges filed by government against her and Rappler.

This is on top of other cases filed against Rappler, which, Ressa maintains, are politically motivated.

For her story in Time, Ressa said:  “I’ve been a war zone correspondent, I’ve planned coverage when one side is shooting against the other side...That is easy compared to what we’re dealing with now.”

She said in the current situation in the Philippines, the “exponential attacks on social media, the inciting to hate just for doing your job...You have no idea when it erupts into real-world violence.”

Describing the Philippines as “ground zero” in the global war on disinformation, Ressa said: “The kind of civil discourse that used to be necessary for democracy – one, we all agreed on facts, two, we actually exchanged ideas – this is gone.”

“With a global platform that connects all of us, you can see there is a playbook,” she said, “in the crosshair of controlling the public narrative are journalists.”

Explaining the decision to honor dissident journalist Khashoggi, who was a US resident and Washington Post columnist, Felsenthal said it was "very rare that a person's influence grows so immensely in death."

"His murder has prompted a global reassessment of the Saudi crown prince and a really long overdue look at the devastating war in Yemen," he added.

The CIA has concluded with "medium-to-high confidence" that Crown Prince Mohammed bin Salman probably ordered Khashoggi's October 2 assassination, according to US media reports.

Prince Mohammed is also accused of contributing to the world's worst humanitarian crisis in impoverished Yemen, where a Saudi-led coalition has been fighting a war against Huthi rebels.

They have been imprisoned for nearly a year, and were convicted under a state secrets act in September. A court will hear their appeal later this month.

The staff of the Capital Gazette in Annapolis, Maryland, also share this year's title. Their newsroom was attacked by gunman Jarrod Ramos in June, leaving four journalists and a sales assistant dead.

US President Donald Trump, the 2016 "Person of the Year," was the bookmakers' favorite this year but in the end was runner-up.

Every year, Time names a "Person of the Year" for individuals, groups, ideas, or objects that "most influenced the news and the world – for better or for worse – during the past year." – with a report from Michael Bueza /Rappler.com