VACCINATION. Minors accompanied by their parents and guardians get their first jab of the COVID-19 vaccine at the Marikina Sports Center on November 3, 2021. 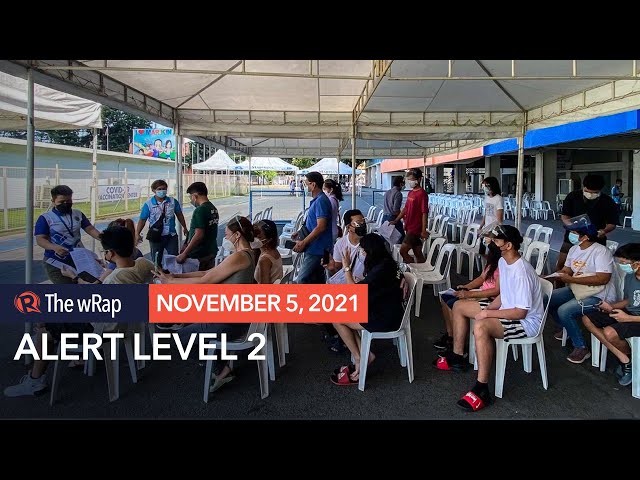 Barely a week after announcing that the National Capital Region (NCR) would remain under Alert Level 3, Malacañang on Thursday, November 4, said that the government body tasked to manage the COVID-19 pandemic decided to “de-escalate” the capital region’s alert status.

Resolution No. 147 from the IATF stated that the alert level will stay in place until November 21.

Roque had announced on October 29 that NCR would remain under Alert Level 3 despite the decreasing number of new COVID-19 cases as a precautionary measure ahead of the move to increase public transportation up to 100% beginning November 4.

On Wednesday, November 3, the Philippines recorded its lowest single-day tally of new coronavirus cases in eight months at 1,591 new cases. The low tally was attributed partly to the lower number of tests conducted and the non-submission of testing data from seven labs. But it also followed a recent trend of declining cases since a surge in September driven by the Delta variant.

Metro Manila has been under Alert Level 3 since October 16. This meant that businesses such as cinemas, theaters, theme parks, swimming pools, libraries, museums, and other tourist attractions, as well as venues for social gatherings like weddings, parties, and debuts were allowed for the first time in over a year.

Like the previous alert level, Alert Level 2 means there are no age-based mobility restrictions in the metro. Alert Level 2 also allows an increased capacity for businesses and activities such as restaurant dine-in, beauty salons and the like, and religious activities, among other things.

According to the IATF, intrazonal and interzonal movement is allowed under Alert Level 2. Local government units may also impose further restrictions as long as they are not stricter than higher alert levels. This is also subject to the evaluation of their respective regional IATFs (RIATFs).

The IATF, according to Roque, also approved the following: