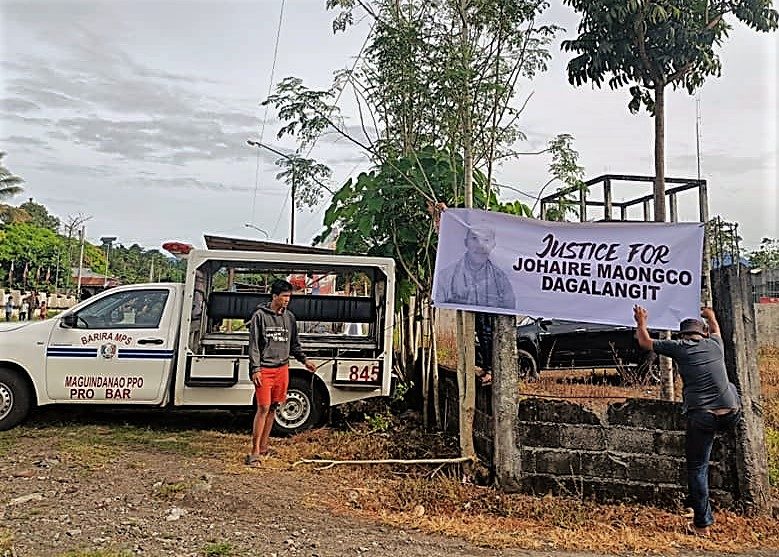 SEEKING JUSTICE. Relatives of 25-year-old Johairie Dagalangit, a detainee found dead in a police station, hang a tarp near the Barira Police Station in Maguindanao del Norte, to seek justice.

Officials sent a dozen members of the Barira town police to the Maguindanao police’s Personnel Holding and Accounting Unit while the investigation was ongoing.

A group of police was deployed to man the police station in the town that will be a part of the new Maguindanao del Norte.

Although the province was already split into two by a law that was ratified this month, Maguindanao del Norte and Maguindanao del Sur are still being served by one provincial police office.

Maguindanao police director Colonel Roel Sermese removed Major Radzak Musa as Barira town police chief to give way to an investigation into the death of 25-year-old Johairie Dagalangit, a town resident who surrendered after he badly hurt a child in a motorcycle accident in the village of Tugaig in Barira.

Dagalangit was found dead inside the police station’s detention cell a day after he was brought there.

The Barira town police station said the detainee died as a result of a nightmare.

The elder Dagalangit said his son did not have such injuries when he was brought by a barangay chairman to the police station.

Sermese also said the Regional Investigation and Detective Management Division of the Philippine National Police (PNP) in the Bangsamoro Autonomous Region in Muslim Mindanao (BARMM) has started the investigation into the mysterious death. – Rappler.com