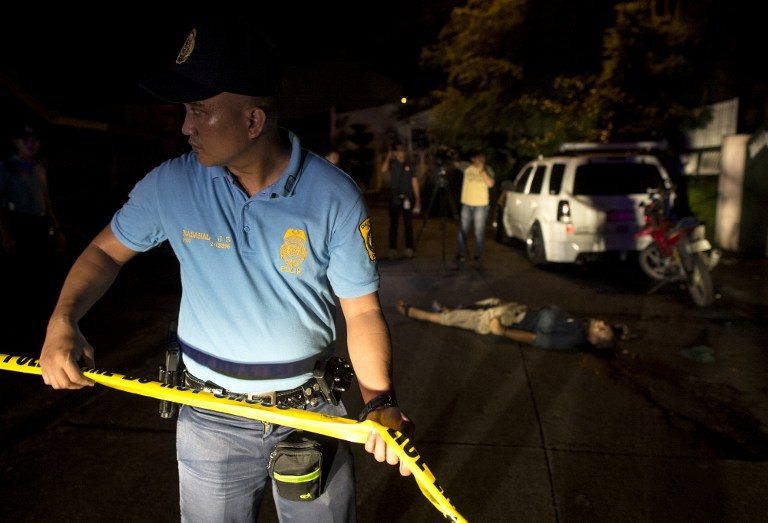 This photo taken on July 15, 2016 shows a police officer roping off the crime scene as the body of an alleged drug dealer shot dead lies in the street in Manila. Hundreds of people have died since President Rodrigo Duterte won a landslide election in May, promising to rid society of drugs and crime in six months by killing tens of thousands of criminals. Police figures showed this week that 402 drug suspects had been killed a month into Duterte's presidency. This figure does not include those slain by suspected vigilantes. / AFP PHOTO / NOEL CELIS

Facebook Twitter Copy URL
Copied
The Duterte government, in its 'official' count,' is underreporting by the thousands deaths in its anti-drug campaign

The Duterte government’s “real numbers” are far from reality.

Rappler learned that around 2,000 deaths in police operations are missing in #RealNumbersPH, the Duterte government’s official tally. This comes as human rights groups, which count at least 30,000 killed, accuse the government of underreporting drug war deaths.

In its latest update, the #RealNumbersPH project counted 5,810 deaths in anti-drug operations from July 1, 2016 to July 31, 2020. This is the latest in their tally this month of September.

The Philippine National Police (PNP), for its part, has already counted 7,884 deaths from July 1, 2016 to August 31, 2020, according to figures from the PNP’s Directorate for Operations obtained by Rappler.

RealNumbersPH obtains its data from “all law enforcement agencies” such as the PNP, Philippine Drug Enforcement Agency (PDEA), National Bureau of Investigation, Bureau of Customs, and Bureau of Corrections.

Going by the PNP count, there are at least 2,000 deaths already counted by the PNP which have not been factored in, in the #RealNumbersPH tally.

While the PNP’s count runs until August 31, #RealNumbers is lagging behind with its tally until July 31 only. Unlike the PNP which has kept more updated figures, #RealNumbersPH has been delayed by more than a month already this September.

Aside from the killings, the number of operations and the number of arrests have wide disparities, too, notwithstanding the one-month difference in reporting periods. While #RealNumbersPH counted 173,348 operations, the PNP already counted 223,608 – a difference of 50,260.

#RealNumbersPH reported 251,889 arrests, while the PNP reported 345,708. This means around 93,819 arrests have not been counted by the Duterte government’s official record.

The arrests missing in the #RealNumbersPH count

The #RealNumbersPH project is managed by the Presidential Communications Operations Office, with Assistant Secretary Marie Rafael as its point person, in coordination with law enforcement agencies like the PNP and PDEA.

Rappler sought an explanation from Rafael, who declined to comment and told Rappler to instead ask the PNP and PDEA.

Rappler sought the comment of PNP spokesman Colonel Ysmael Yu and PDEA spokesman Derrick Carreon through text messages. Yu has not replied as of posting. Carreon, in a phone call, declined to comment.

The vast discrepancy casts doubt on the credibility of the Duterte government’s initiative, which was started in an attempt to take control over the release of official numbers in the administration’s popular but bloody anti-drug campaign. Since it was launched, the #RealNumbersPH initiative has also been called out for inconsistencies.

The numbers from the #RealNumbersPH tally are the only publicly available data released by the government which media and the public can use. The PNP has not been releasing its own count, deferring to the incomplete and unupdated count of the #RealNumbersPH project.

The new PNP numbers also show that with delays in the consolidation and reporting processes of #RealNumbersPH, the official number of killings under the Duterte administration’s landmark campaign is being underreported.

This is not the first time that discrepancies were spotted. In June 2019, the PNP announced that over 6,600 drug suspects have been killed in the campaign. A month later, accounting for all law enforcement agencies, the PDEA said only 5,500 were killed.

PDEA also said their numbers were verified while the PNP’s earlier announcement was not – even if their figures were validated by police units that the government heavily depends on.

The United Nations counts at least 8,000 killings, while human rights groups estimate there have already been at least 30,000, including killings outside police operations that were inspired by the anti-drug campaign.

On June 30, United Nations High Commissioner for Human Rights Michelle Bachelet spoke before the Human Rights Council and gave a damning report on Duterte’s centerpiece campaign, describing the killings as “widespread and systematic.”

International Criminal Court Prosecutor Fatou Bensouda is also set to decide this year whether or not she will open a formal investigation into killings in the Philippines. – Rappler.com