Mon Tulfo: Nothing wrong with Duterte asking for Sinopharm vaccines

Feb 24, 2021 12:36 AM PHT
Pia Ranada
Facebook Twitter Copy URL
Copied
Tulfo, who is Duterte's special envoy to China, also insists there is 'no conflict of interest' in his application to be a local distributor of Sinopharm shots

Special Envoy for Public Diplomacy to China Ramon “Mon” Tulfo Jr said he sees nothing improper with how Philippine President Rodrigo Duterte sought to obtain samples of Sinopharm’s COVID-19 vaccine, even if the vaccine is yet to be approved by the Food and Drug Administration (FDA).

“I don’t find any irregularity there,” he said in an interview on The Chiefs on Tuesday, February 23.

Asked to further comment on the impropriety of Duterte’s request to Sinopharm, Tulfo said: “You know, we’re now given a choice. Which comes first, the lives of millions of Filipinos or propriety?”

Tulfo himself wrote in his Manila Times column on February 20 about how he had put Duterte on the phone with a supposed local representative of Sinopharm – a certain “John Boja,” – in which the President requested for vaccines for himself and his family.

It’s not clear when exactly Tulfo’s meeting with Duterte took place. But he said on Tuesday that Duterte’s verbal request “reached the Ministry of Foreign Affairs of China,” which supposedly gave the “go signal” for vaccine samples to be sent to the President.

Tulfo then accused vaccine czar Carlito Galvez Jr of being unresponsive to overtures to facilitate the delivery of these doses.

“But because ayaw ni Galvez, hindi alam ng China ngayon kung ano ‘yung gusto natin (But because Galvez was not receptive, China now does not know what we want),” said Tulfo.

TV5 anchor Ed Lingao suggested that Galvez may have been hesitant because no Sinopharm vaccine has been given emergency use authorization (EUA) by the FDA. An EUA is necessary for a vaccine to be legally administered in the Philippines in order to protect citizens from consequences of unsafe vaccines.

By asking for vaccines to be sent to him directly, Duterte appears unaware or unconcerned that such vaccines have to first go through regulatory processes and government approvals.

Tulfo admitted that his source of Sinopharm vaccines was the same source as the Presidential Security Group for its doses, also administered among personnel without FDA or Department of Health approvals. 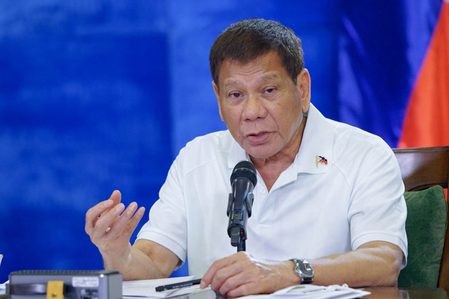 The Duterte special envoy also claimed that many other government officials, including a Cabinet member and a senator, were also vaccinated with Sinopharm shots.

He agreed that these vaccines are smuggled in nature.

Tulfo’s own conflict of interest

Tulfo had also “confessed” in his column that he is applying to be a local distributor of Sinopharm COVID-19 vaccines.

In the The Chiefs interview, he said he was applying with a company called “Apollo,” which supposedly secured a contract with a Singapore subsidiary of Sinopharm for its COVID-19 jabs. Sinopharm is owned by the Chinese government.

He repeatedly denied using his position as special envoy to China to get dibs on a local distributorship deal. He only managed to get himself, a driver, and his two bodyguards vaccinated through the efforts of a “friend.”

“I don’t feel guilty about it,” he said.

Later on in the interview, he asserted, “I don’t see any conflict of interest at all.”

Tulfo even sought to downplay the conflict of interest issue by claiming he is “technically not a government official” because his special envoy role is only “honorific.”

Meanwhile, his application to supply Sinopharm vaccines to the Philippines remains “pending” because the vaccine, lacking an FDA approval, cannot yet legally enter the Philippines.

In other parts of the interview, he griped that Galvez appeared to be against Sinopharm for reasons he could not fathom.

Galvez has not responded to Rappler’s request for comment on Tulfo’s allegations. But Sinopharm is yet to apply for an EUA, though it had expressed interest in holding clinical trials in the Philippines.

The Inter-Agency Task Force on Emerging Infectious Diseases had approved such clinical trials back in May 2020, but the plan was scuttled after Sinopharm said the Philippines would have to shoulder the funds for the trials. – Rappler.com