FINDING INFECTIONS. Residents who lined up for the food distribution drive in Barangay Old Balara, Quezon City on May 25, 2021, undergo swab test for COVID-19 at Sitio Liwanag.

The area known as “NCR Plus” – Metro Manila, Bulacan, Rizal, Laguna, and Cavite – will remain under general community quarantine (GCQ) for the month of June. 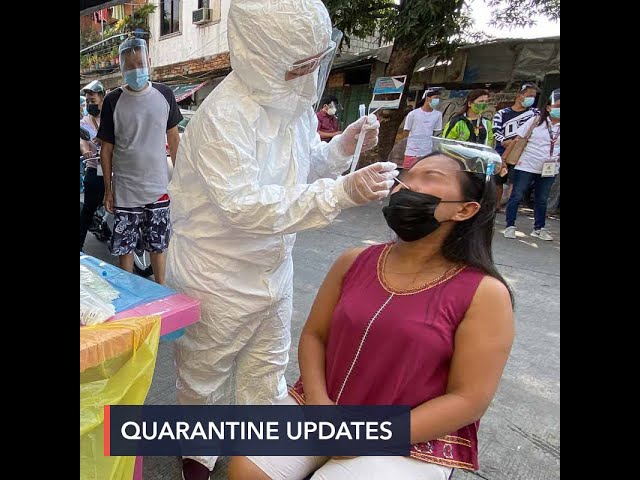 This was announced during President Rodrigo Duterte’s meeting with pandemic task force officials on Monday, May 31, at the Malacañang Golf Clubhouse.

However, 14 areas, including Iloilo City and much of the Zamboanga Peninsula, have been placed under the stricter modified enhanced community quarantine (MECQ) due to higher numbers of reported infections there. This will last for half the month of June.

The classifications for different parts of the country for June are as follows:

GCQ ‘with restrictions’ from June 1-15

The rest of the country is under the least strict quarantine classification, modified GCQ (MGCQ) for the entire month of June.

Metro Manila mayors earlier recommended keeping the megacity under GCQ but allowing venues of meetings and conferences to accommodate more people. It is not yet clear if this slight relaxation of rules was also approved by Duterte.

They also wish to maintain the 10 pm-to-4 am curfew.

Octa Research, a team of experts studying the COVID-19 situation in the Philippines, also backed keeping the GCQ while lessening restrictions for businesses or sectors that have been strictly following health protocols.

While the overall trend for the country is a decreasing number of COVID-19 cases reported daily, and the figure went as low as 3,083 last May 23, the last days of the month have seen cases soaring past the 5,000 mark. On May 28, it even went up to a little over 8,700. – Rappler.com