DISMISSED. Detained senator Leila de Lima as she arrives at the Quezon City Metropolitan Trial Court to attend a hearing on her disobedience to summons case on February 27, 2019. 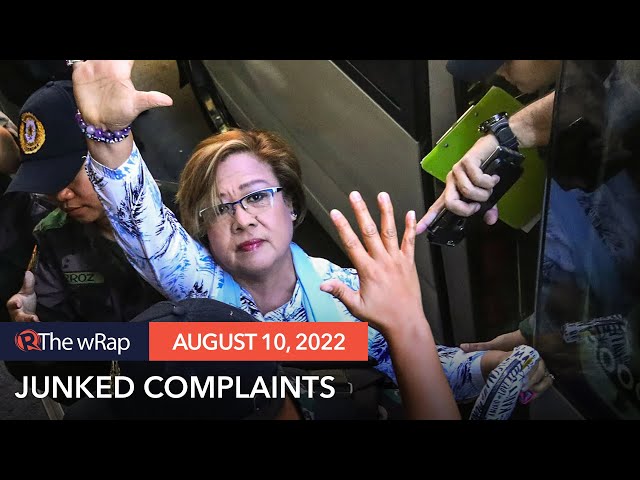 The Ombudsman resolution, through prosecutor Daniel Von Evan Panelo, stated there was no probable cause to indict De Lima and Dayan.

The latest resolution was for the complaint-affidavit filed by the Ombudsman’s special team of investigators in 2018. Complaints against the two stemmed from the claim that De Lima allegedly received money from self-confessed drug lord Kerwin Espinosa in exchange for the protection of Espinosa’s illegal drug trade.

In explaining the ruling, the prosecutor highlighted the conflicting statements from Espinosa and Marcelo Adorco. Adorco is the government’s witness against Espinosa.

The resolution stated that Espinosa and Adorco’s statements on how De Lima received the alleged P8-million bribe money were inconsistent. The testimonies contradicted each other on several points: on how the alleged bribe money was delivered, what the tranches of delivery were, and whether De Lima was present to personally receive the money from Espinosa.

“Failing to provide a semblance of clarity on these crucial details, it would be difficult to excite in a reasonable mind a well-founded belief that the respondents had received money from Kerwin in exchange for ‘protection’ for the latter’s illicit drug trade,” the resolution stated.

It added that the inconsistencies in the testimonies against De Lima could not be brushed aside as “trivial” or “inconsequential. The resolution said the claims failed to provide an accurate narration of facts.

“The testimonies the complainant had presented failed to provide a clear, accurate, and consistent narration of facts crucial in determining whether the elements of Direct Bribery and Indirect Bribery exist.” In April this year, Espinosa eventually cleared De Lima from all of his accusations. Recanting his previous statements, the Visayas drug lord said he was “coerced, pressured, intimidated and seriously threatened” to make all his past statements.

Even Dayan had recanted his statements against De Lima, saying he did it due to coercion.

However, the Ombudsman ruling, which dismissed the bribery complaints did not rely on Espinosa’s retraction, but on the inconsistencies of the testimonies. Among the elements of bribery is receiving some gift or present – directly or through another – for agreeing to perform an act constituting a crime.

To date, De Lima has been acquitted in one of three conspiracy to commit drug trading charges against her. The acquittal was handed down in February 2021. – Rappler.com