MANILA, Philippines – The Department of Foreign Affairs (DFA) told a Senate hearing on Tuesday, January 17, that very few Filipinos accused of crimes abroad get acquitted despite available legal assistance from the Philippine government.

At the hearing of the Senate committee on migrant workers, Senator Joel Villanueva flagged data from the DFA showing that there were zero acquittals of Filipinos facing criminal cases from January to June 2022. 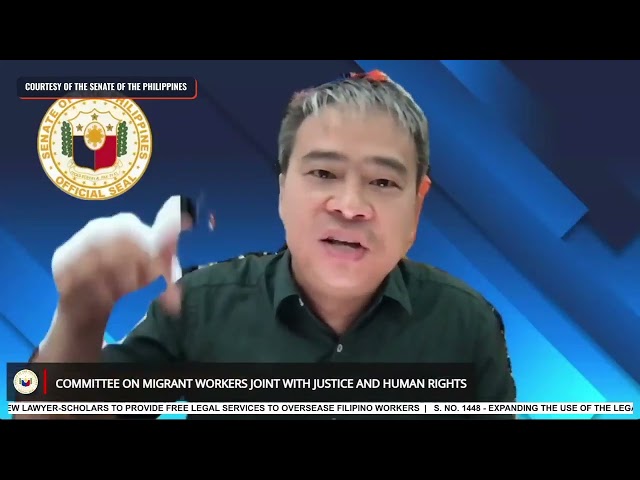 (Because, what happens there is that most of the time, how we help our Filipinos – these are settled and no longer prosper into cases.)

According to the same chart, 1,278 Filipinos were convicted with finality out of the 5,141 monitored cases in that time period.

Villanueva and Tulfo said this was “not acceptable.”

“If there are no acquittals, what the hell are we doing here? We don’t even evaluate the things that we do. So, the next question would be, why zero acquittal? Is it weak evidence-gathering?” Villanueva said in a mix of English and Filipino.

(Or the DFA is getting weak lawyers to defend Filipinos who have problems abroad. Maybe the ones they run to for help – sorry – are inept, not quality lawyers. That’s why we get zero acquittals.)

The data was brought up during the hearing set to hear interpellations on a bill expanding the use of the DFA’s legal assistance fund (LAF) for overseas Filipino workers. While De Vega agreed with the senators that low acquittals are unacceptable, he also defended the DFA’s position, “The bottomline is they get legal representation kaysa wala (instead of nothing).”

This did not reassure the senators. “Parang, ‘Sige, mayroon kayo, tapos bahala na kayo sa buhay ‘nyo,'” added Villanueva. (It’s like saying, “Okay, you can have lawyers, but after that, you’re on your own.)

“Huwag ‘yung basta’t kuha lang tayo ng abogado basta’t magkaroon ng abogado. Dapat ‘yung abogado na magaling, abogadong de kalibre na alam ‘yung kaso, ‘yung kayang ipanalo ‘yung kaso,” said Tulfo. (You shouldn’t just be getting lawyers just for the sake of having them. You should get lawyers that are talented, quality, who are familiar with the cases, who can win the cases.)

According to De Vega, the DFA conducts reviews after the lawyers render service, and is “always in touch” with posts regarding legal assistance via virtual meetings.

The senators asked the DFA to submit documents on post-service reviews.

In the Tuesday hearing, lawyer David Castillon of advocacy group Advocates & Keepers Organization-OFW (AKO-OFW) called on the government to monitor when OFWs are accused of theft, as abusive employers sometimes file theft cases to keep their Filipino workers from running away.

(Sometimes, [the workers] don’t actually steal… The recruitment agencies want our POLOs to help immediately file cases against employers with the ministry so that they can’t strategize and file a case of theft. There are so many of those – instead of the employer getting punished, it’s the other way around.)

Because the AKSYON fund is for OFWs, the DFA has said that its LAF would be used for non-OFWs, like migrants, students, and Filipinos married to foreigners. However, De Vega said that the DFA may still use its LAF for OFWs in host countries that do not have Migrant Workers Offices, formerly known as POLOs. – Rappler.com