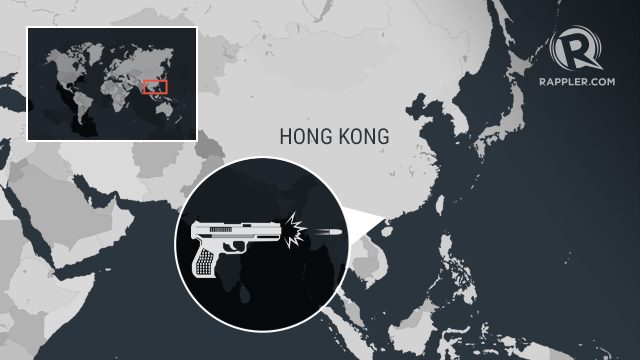 Facebook Twitter Copy URL
Copied
The Philippine consulate in Hong Kong says it is ready to provide any necessary assistance to the 43-year-old Filipino, who survives after a 'successful' surgery

According to Hong Kong police in a Wednesday, January 25 statement, the officer believed his life was in danger. The 43-year-old Filipino allegedly grabbed the cop by the neck and pushed him down a flight of stairs. Hong Kong radio station RTHK reported that police said the man appeared to be drunk.

The police statement did not mention the suspect’s nationality.

“When police officers sped to scene and conducted investigation, a foreign man suddenly turned emotional, suspectedly assaulted a male police officer with hands, pushed him down the stairs, chased him, and attempted to assault him again. Facing threats to life, the male police officer gave verbal warnings to the foreign man but in vain and subsequently fired three shots at him,” the police said.

The policeman shot the Filipino in the abdomen and arm. The police said the victim was conscious when he was airlifted to the Pamela Youde Nethersole Eastern Hospital in Chai Wan.

“Our foremost concern is the well being of the wounded Filipino national whom we understand underwent a successful surgery. We wish him a speedy recovery,” said Tejada.

The police report also mentioned that another “foreign” 33-year-old man was arrested for assaulting police and obstructing their duty in the incident. Hong Kong media reported that this man was also Filipino. Tejada, however, said that there were “other Filipinos” being investigated in connection with the incident, but they were not arrested.

Asked if the consulate would be ready to provide legal assistance as well, should the Filipinos be sued, Tejada said, “The Philippine government is ready to render assistance to our kababayan.”

Tejada said that the Philippine consulate in Hong Kong is coordinating closely with Hong Kong authorities, and expect to receive a full report “soon.” The consulate is also in touch with his family, on standby to help if needed.

Hong Kong police had defended the cop’s decision to open fire. “After an initial probe, we feel that the colleague may indeed feel his life was under threat, and he may be seriously wounded. It was suitable for him to use his gun,” RTHK quoted Au Yeung Ki, an acting marine police superintendent, as saying.

A report from the Hong Kong Free Press said that it is rare for Hong Kong police to use live ammunition, more so on the quiet, outlying island of Peng Chau. – Rappler.com