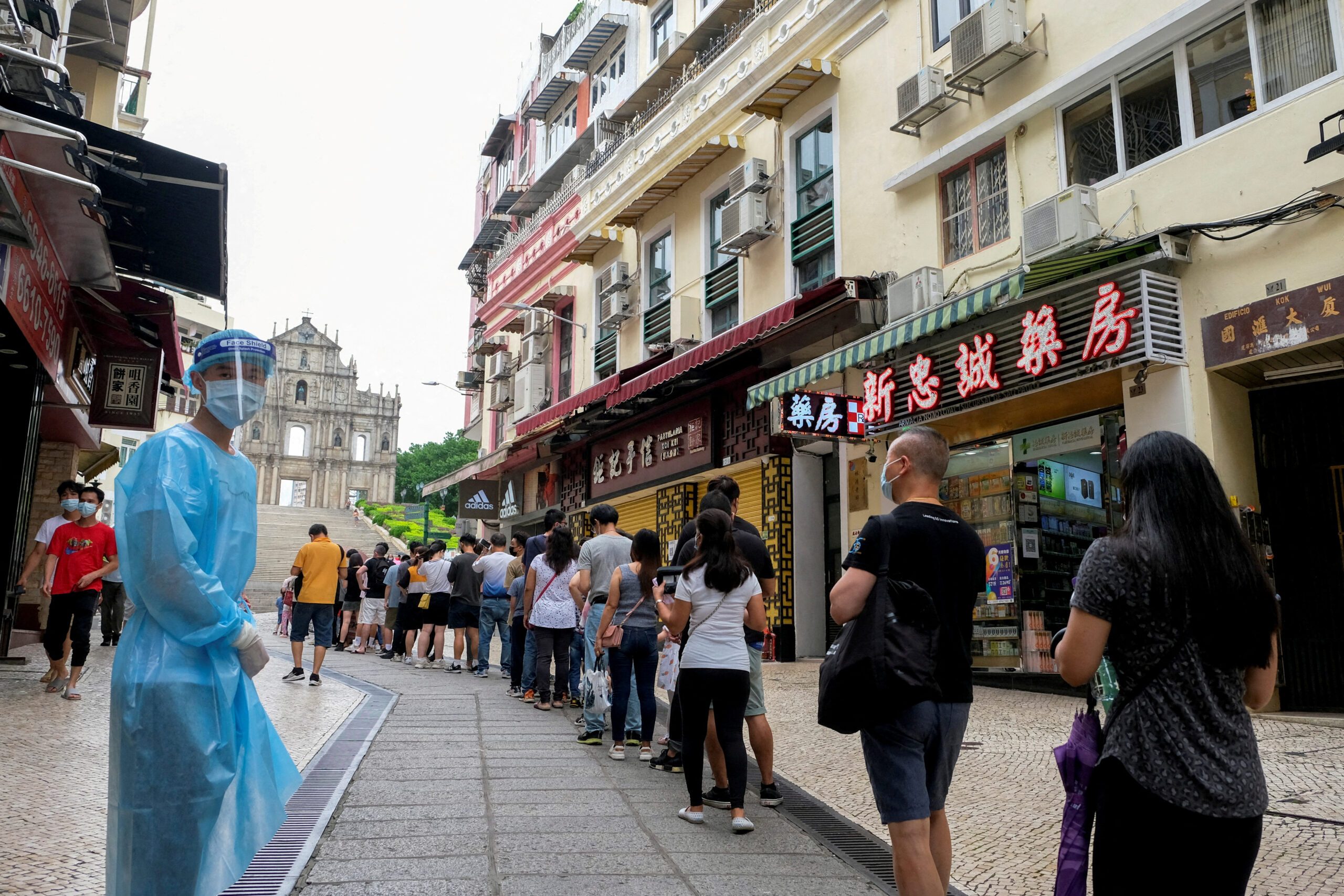 Facebook Twitter Copy URL
Copied
(1st UPDATE) 'It won’t be a surprise if there are people who would distance themselves from Filipinos thinking that they are more susceptible to the virus because of their nationality,' says a Filipino worker in Macau

MANILA, Philippines – The Macau government has ordered that any resident holding a Philippine passport must take a daily nucleic acid COVID-19 test beginning Friday, July 22, in a bid to curb coronavirus cases.

Health official Leong Iek Hou made the announcement in a briefing on Thursday, July 21, adding that Filipinos accounted for 9.5% of the city’s total COVID-19 cases in the current outbreak.

“Our epidemiology research found they tend to have more gatherings, like meetings among friends,” Bloomberg quoted Leong saying.

“It’s likely that they have more interactions within their own ethnicity, so we need to find out whether there are hidden sources of infections among them via frequent testing,” Leong added.

The announcement caused criticism among Filipinos in Macau and other social media users who called the policy “racist” and “discriminatory.”

On Thursday evening, the Philippine consulate general in Macau appealed to Filipinos for their understanding, as the Macau government has laid down similar measures for other ethnic groups in the past for its COVID-19 response. The consulate also clarified that the daily testing would only be until July 24.

(Let us avoid making this policy a political issue. Instead, let’s look at this as a health issue in the authorities’ inclusive goal to achieve the dynamic zero-COVID target.)

In October 2021, Macau authorities ordered foreign workers from Nepal and Vietnam to undergo COVID-19 testing every other day. Burmese passport holders were also required to be tested earlier in 2022.

“This situation calls for our calmness and deeper understanding of Macau’s policies. Our cooperation is crucial in maintaining the safety of the society of Macau that we are all part of,” the consulate added in Filipino.

There are around 30,000 Filipinos in Macau, according to the consulate.

“Because of the number of Filipinos in Macau, it will not be a surprise that many of us will get infected. But that doesn’t mean we have [a larger] chance to contract the virus than any other group and be singled out as a key group and labeled unnecessarily,” Sicado, a longtime resident of Macau, told Rappler.

“Policies like this will cause social stigma towards Filipinos, or any other group it is directed towards… It won’t be a surprise if there are people who would distance themselves [from] Filipinos thinking that they are more susceptible to the virus because of their nationality,” he added.

Most OFWs in Macau are employed in tourism-related sectors such as hotels, casinos, and restaurants, and the policy may cause “further tension” as they engage in face-to-face service work, Sicado said.

Many Filipino migrant workers in Macau are also working as domestic helpers. Sicado said it “doesn’t make sense” to subject stay-in helpers who don’t go out to daily COVID-19 testing. “It is illogical to have Filipino [domestic helpers] get tested daily while the employers who live with them or spend time with them are magically less likely to contract the virus,” he said.

Sicado said the consulate’s statement was understandable from a diplomatic and political viewpoint, “but it shouldn’t be an excuse to disregard the blatant racism shown.”

“[When Macau imposed the policy on Burmese workers,] there was also a public outcry then, and public outcry now… By saying it has been done before doesn’t mean it’s right. It was racist before and still racist now,” he said.

“Macau is my second home and I love this place… To see it being discriminatory especially towards my fellow countrymen is heartbreaking,” Sicado said, adding that the Filipino community has been compliant with the special administrative region’s COVID-19 response since the pandemic began.

‘Be part of solution’

Two days after the Macau government announced COVID-19 testing requirements for Filipinos, the Philippine consulate general in Macau again issued another statement asking Filipinos not to “politicize” the policy and abide by the country’s rules.

“The Philippine consulate general, at the outset of this directive, has issued its position taking the directive as purely a health issue. And yet there are those who remain focused on politicizing this,” it said in a statement released on Saturday, July 23.

The consulate general said it is in “agreement” with the Macau government’s findings and how it necessitates a testing requirement for Filipinos – a requirement that other nationalists had also been subjected to.

“Are we Filipinos better than our sisters and brothers from our neighbor countries just because we have a significant number in Macau?” asked the consulate general.

It again urged Filipinos to “be part of the solution” and cooperate with the Macau authorities. – Rappler.com