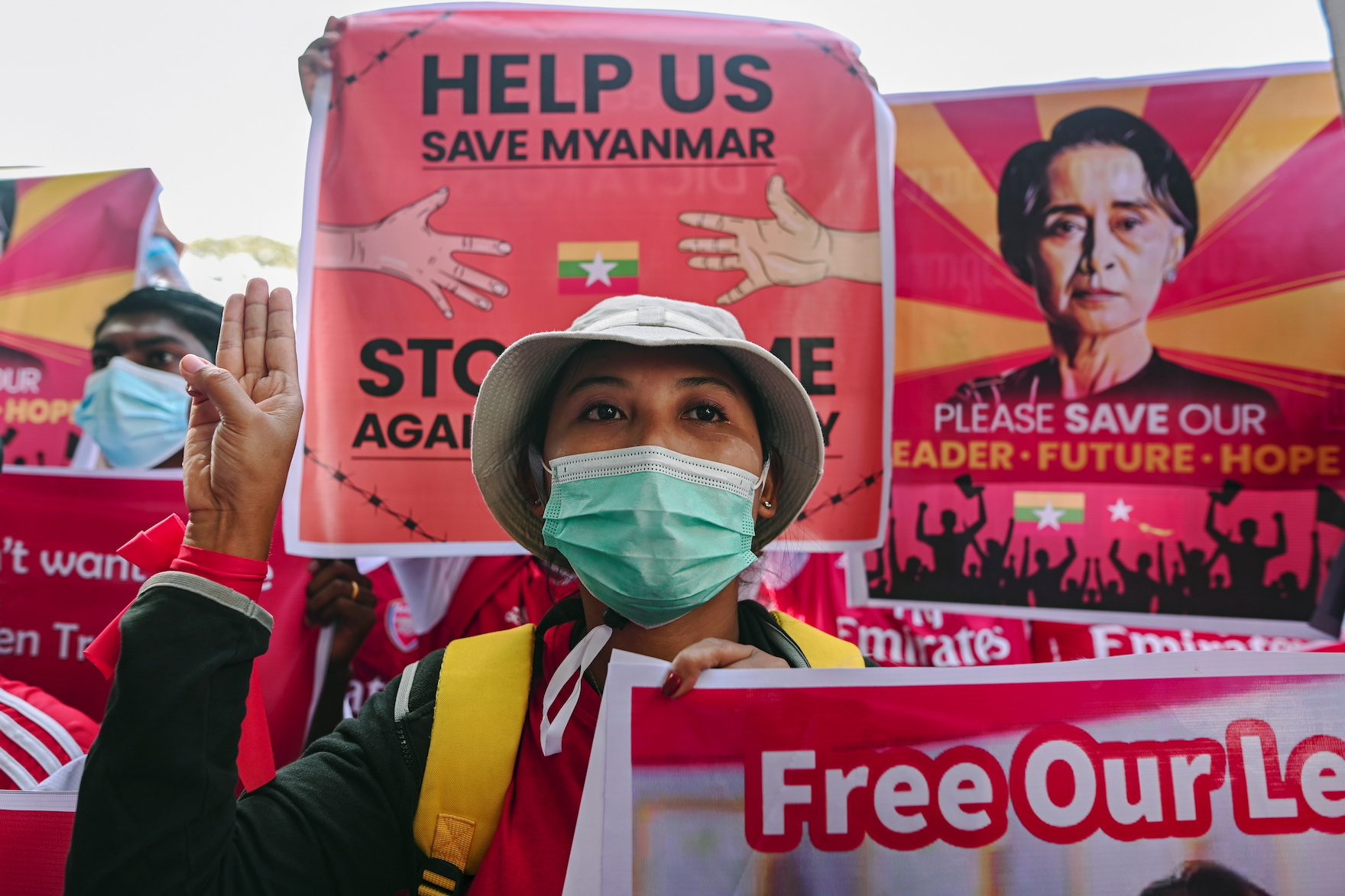 PROTEST. A demonstrator flashes a three-finger salute while holding a sign to protest against the military coup and demand for the release of elected leader Aung San Suu Kyi, in Yangon, Myanmar, on February 12, 2021.

Facebook Twitter Copy URL
Copied
'The rest of ASEAN must stand by Myanmar, ready to give what help it is asked by the people and government of Myanmar,' adds Philippine Foreign Secretary Teodoro Locsin Jr

The Philippines called for the immediate release of detained Myanmar civil leader Aung San Suu Kyi and a “complete return” to the country’s “existing state of affairs,” as crisis in its neighboring country continued to worsen following a military coup of its democratically elected government.

Philippine Foreign Secretary Teodoro Locsin Jr made the declaration during an informal meeting among foreign ministers of the Association of Southeast Asian Nations (ASEAN) on Tuesday, March 2, where he expressed “deep concern” over recent developments in Myanmar.

Since the Myanmar military’s February 1 takeover, at least 21 people have been killed in a bloody crackdown that seeks to quell weeks of unrest. Soldiers and police have opened fire on civilians who gathered in the thousands to call for the restoration of democracy.

“The first step should be for the immediate release of Daw Aung San Suu Kyi and subsequent dialogue among the parties involved in their country’s destiny,” Locsin said.

The foreign affairs chief reiterated a “complete return” to Myanmar’s “previously existing state of affairs” – where Suu Kyi and the military existed alongside one another – was “needed,” adding the Philippines supported a fuller democracy in Myanmar. Locsin also called for ASEAN unity, saying the regional bloc “must stand by” its fellow member, “ready to give what help it is asked by the people and government of Myanmar.”

“Our appeal is not from the outside but from inside what we claim is one family: a family first of peoples and not of governments; feeling the hurt in one of its members. In the Philippines, we have a saying: The hurt of the small finger is felt by the whole body. Myanmar is not a small finger but a big part of the two hands that together make up the family of ASEAN 10,” he said.

ASEAN members met on Tuesday to discuss the coup, but failed to find a breakthrough to get the nation back on the path to democracy after February’s military takeover.

A statement from the meeting’s chair, Brunei, on the outcome of the meeting said ASEAN expressed concern about the situation in Myanmar and called on “all parties to refrain from instigating further violence.”

“We expressed ASEAN’s readiness to assist Myanmar in a positive, peaceful, and constructive manner,” it said. Locsin earlier tweeted that ASEAN would be firm with Myanmar and said the bloc’s policy of non-interference in members’ internal affairs “is not a blanket approval or tacit consent for wrong to be done there.”

Locsin’s latest statement is a marked departure from the Philippines first saying it will not “interfere” with the military takeover in its neighboring country.

On Tuesday, the foreign affairs chief said the Philippines has “always stood by” Myanmar and Suu Kyi, and would continue to do so moving forward. (READ: Locsin on Myanmar coup: ‘The West destroyed Suu Kyi’)

“We worked hard to give Myanmar back the respect due a responsible member of the community of nations moving, in the face of great challenges, towards fuller democracy. This should not stop now.  Indeed, more than ever, we should help all the more,” he said. – Rappler.com