DELIVERY. The Philippines' first shipment of the Moderna COVID-19 vaccine arrives at the Ninoy Aquino International Airport on June 27, 2021. 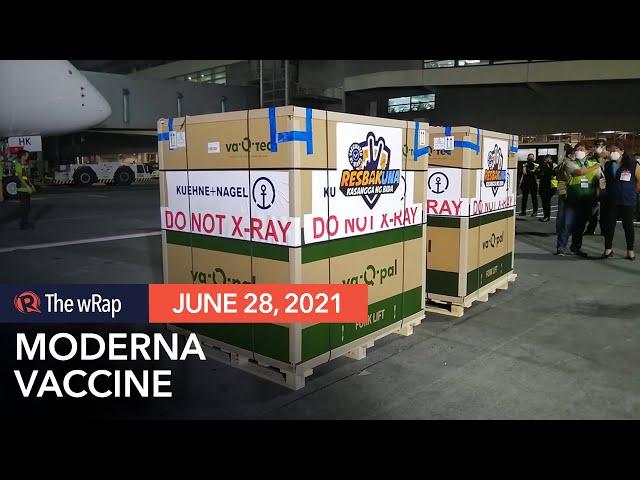 The Philippines received its first shipment of Moderna’s coronavirus vaccine on Sunday, June 27, marking the entry of a fifth shot that will be widely used in the government’s immunization drive against COVID-19.

An initial 249,600 Moderna doses arrived at around 11 pm at Terminal 3 of the Ninoy Aquino International Airport.

The Enrique Razon Jr.-led ICTSI spearheaded the private sector effort to pool and purchase Moderna doses in a tripartite deal signed with the American firm and the Philippine government.

A total of 20 million Moderna doses are expected for the Philippines in 2021 – 7 million of which were purchased by the private sector, and 13 million for the government, paid for through multilateral loans from the World Bank.

The latest vaccine shipment brings the total number of doses received by the Philippines since February 28 to about 16.4 million. Moderna is also the fifth brand to be used in the government’s vaccination campaign, following Sinovac, AstraZeneca, Sputnik V, and Pfizer-BioNTech.

Moderna’s vaccine was initially expected to arrive last Monday, June 21, but there were issues with transportation and the company’s storage facility. Despite this, Philippine Ambassador to the United States Jose Manuel “Babe” Romualdez had given assurances that deliveries would be “continuous” from July onwards.

The Philippines’ Food and Drug Administration earlier cleared Moderna’s vaccine for emergency use in the country on May 5, in one of the agency’s quickest approvals done in just 10 days.

FDA Director General Eric Domingo said the agency was able to fully evaluate and approve Moderna’s vaccine faster than the 21 days allotted for reviewing COVID-19 vaccines or drugs for emergency use because the company submitted complete documents.

Like Pfizer’s vaccine, Moderna’s shot makes use of the messenger RNA or MRNA platform, which is a genetic material that cells read to make proteins. In Phase 3 trials, Moderna’s vaccine demonstrated 94% efficacy in preventing clinical COVID-19 and 100% efficacy against severe disease.

Storage of Moderna’s vaccine would be more complex compared to other jabs as it requires being frozen in colder temperatures, specifically -25°C to -15°C up to expiration. But unlike the Pfizer vaccine, thawed and unopened vials of Moderna’s shot may be kept longer in standard refrigerated temperatures of 2°C to 8°C for 30 days, making it easier to handle in countries like the Philippines equipped with such storage facilities.

Moderna’s vaccine was developed with the United States National Institutes of Health.

Aside from Moderna’s vaccine, the Philippines expects to receive more shipments from Sinovac, the Gamaleya Research Institute, and the global COVAX Facility for the remainder of June.

Since the Philippines launched its immunization drive on March 1, around 5.75% of the country’s population have received the first of two doses. Those who are fully vaccinated represent around 1.98% of the population, as of June 6. – Rappler.com