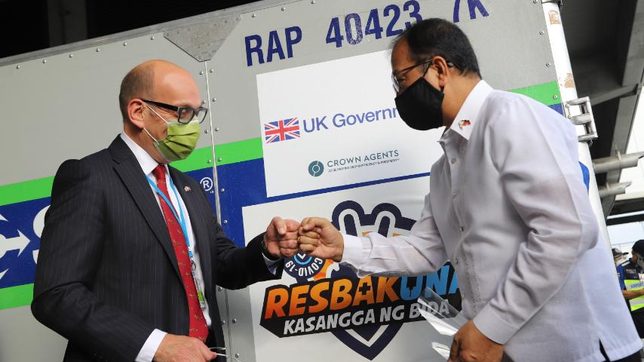 The Philippines received over 400,000 AstraZeneca doses from the British government on Monday, August 2, as local governments seek to ramp up vaccination efforts in a bid to curb the spread of the highly-transmissible Delta variant.

The shipment of 415,040 AstraZeneca shots arrived in the Philippines less than a week after the United Kingdom announced it would donate vaccines to the country. The delivery landed at the Ninoy Aquino International Airport shortly before 5 pm on Monday and was welcomed by vaccine czar Carlito Galvez Jr., along with outgoing British Ambassador to the Philippines Daniel Pruce and other officials.

The British embassy in Manila earlier said donated vaccine doses were made by Oxford Biomedica in Oxford and packaged in Wrexham, North Wales. Vaccine doses delivered to the Philippines were also part of the first batch of the 100 million doses the British government allocated to poorer nations.

“As we have all agreed in our long standing partnership between our two countries, none of us are safe until all of us are safe and we have a very important shared objective of assuring maximum access to vaccines,” Pruce said.

The swift delivery of vaccines is expected to further boost the country’s vaccination drive, especially as health officials seek to ramp up vaccination efforts in Metro Manila, the epicenter of the local epidemic. Infections and hospitals admissions have seen a recent increase in the last few weeks as concerns grow over the presence of the Delta variant.

Local officials had requested the national government to provide them with at least 4 million doses to ramp up vaccinations – 2.5 million doses of which have been secured.

Aside from the UK, the Philippines received 3.2 million Johnson & Johnson vaccine doses from the United States, 1.1 million AstraZeneca doses from Japan, and 1 million Sinovac doses from China.

Since the start of its vaccine drive on March 1, around 10.29% of the country’s population have received the first of two doses of the vaccine. Those who were fully vaccinated represent around 6.21% of the population as of July 27. – Rappler.com