Legarda: I could not refuse Aquino 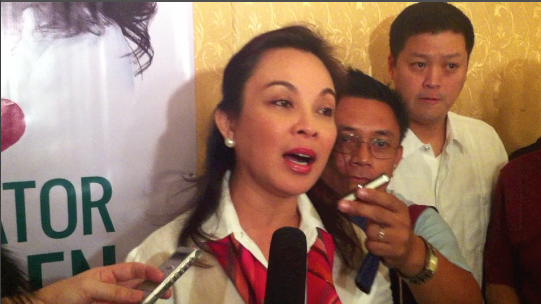 MANILA, Philippines - She said she could not say no to the President.

Sen Loren Legarda, who has consistently topped surveys, said she would be part of the senatorial slate of President Benigno Aquino III's Liberal Party (LP), which has coalesced with the Nacionalista Party (NP), Laban ng Demokratikong Pilipino (LDP), partylist Akbayan, and the Nationalist People's Coalition, which Legarda has been a member of since 2007.

Legarda was personally invited by President Benigno Aquino III to join the coalition, an offer she told reporters she could not refuse on Monday, October 1, at the proclamation rally of the coalition's senatorial slate. (Check out Legarda's profile on Rappler's #phvote site.)

She said she had initially told the President she believed in his agenda whether or not she was part of the slate, and told Aquino she didn't need to be part of the coalition to ensure her support. Legarda said she did not want to take anyone's spot but that Aquino assured her the spot was reserved for her, which ultimately convinced her to accept the slot.

(I believe in the principled cooperation of the leaders of our country. I support President Aquino and his clean and just governance).

Legarda has been continuously wooed by both the administration's coalition and its opposition, Vice President Jejomar Binay's United National Alliance (UNA). She thanked UNA for making her a guest candidate, and said she wanted to focus less on divisive politics rather than serving the people.

Legarda was hesitant and indirect when asked whether her inclusion on the President's slate meant she would not appear with UNA on the campaign trial.

She refused to categorically answer but did say she does not plan to attend many sorties and has personal plans for campaigning, which she said would be unique and "green."

Among her plans in campaigning include tree planting, cleaning of waterways, barangay-based disaster risk and climate change workshops, health missions for the youth and women, feeding missions and green job fairs.

LP officials have made it clear however that candidates on their slate are not allowed to campaign with UNA.

Legarda said that her being in two different parties may be a chance to prove to Filipinos that it is possible to run for politics in a peaceful manner that prioritizes the people and not the parties.

"Maybe it's a blessing to be a common candidate of the coalition and UNA to show that a candidate does not have to fight with each other," she added in Filipino. "Let us focus on the issues that unite, rather than divide."

Legarda also pointed out that unlike in the US that has clear agenda differences between Democrats and Republicans, the Philippines has no clear party system and that voters will not remember whether she was in Club Filipino or Coconut Palace -- where UNA declared its proclamation rally -- when casting their votes.

Legarda is running for her third and final term as senator. - Rappler.com