MANILA, Philippines – Like relatives of his self-proclaimed wife Kris, he has made it a habit to enter politics. But unlike politicians from the Aquino family, he has always been declared a nuisance bet.

Daniel Magtira, 52, listed Kris Aquino as his spouse when he filed his certificate of candidacy (COC) last October 1. It was not his first time to do this, having run for various positions for the past 11 years. 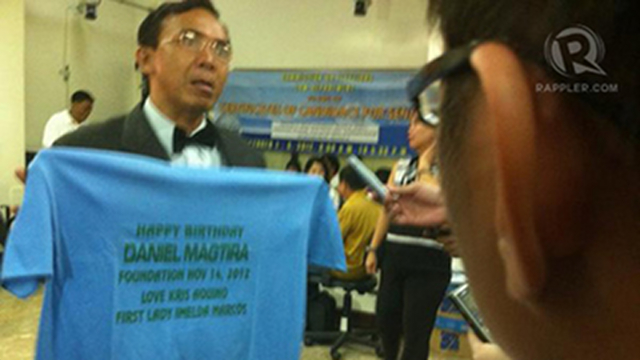 A Commission on Elections (Comelec) resolution in 2009 shows that Magtira already ran for president in 2010 and 2004, and for senator in 2007 and 2001. The Comelec repeatedly disqualified him as a nuisance bet.

Like Magtira, a fifth of those who filed their senatorial COCs last week have previously been disqualified by the Comelec. Declared as nuisance candidates, they range from those who are mentally unfit, to those who want to confuse the public, to those without financial means to run a nationwide campaign.

Research by Rappler shows that based on Comelec Resolution No. 8713 in 2009, 16 out of the 84 COC filers last week had already been disqualified by the Comelec. The so-called habitual nuisance bets include the following, along with the years when they got disqualified: 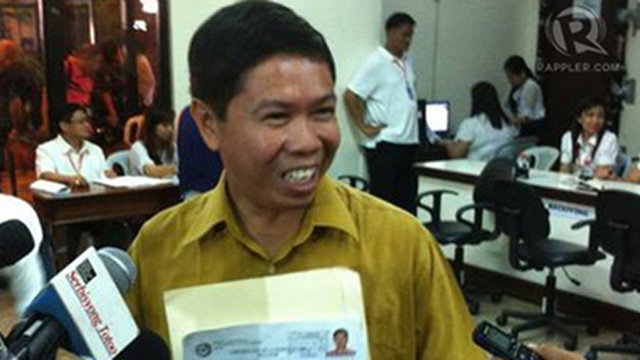 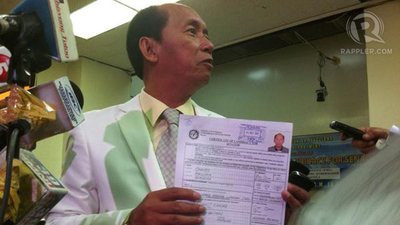 OLD TIMER. Filing his COC for the 4th time, Melchor Chavez is a member of the Marcos-era Kilusang Bagong Lipunan. Photo by Reynaldo Santos Jr

In past elections, each met the Comelec's definition of a nuisance bet, namely, anyone who files a COC “to put the election process in mockery or disrepute or to cause confusion among the voters by the similarity of the names of the registered candidates, or who by other acts or circumstances is clearly demonstrated to have no bona fide intention to run for the office for which the COC has been filed.”

During this year's COC filing, however, the Comelec still granted them their 15 minutes of fame. Why does the poll body keep on entertaining habitual nuisance bets?

Comelec Chair Sixto Brillantes Jr said it's all about fairness. “Filing a certificate of candidacy is a matter of right. They have the right to file. We cannot prevent them,” Brillantes said in an interview.

He said even habitual nuisance bets deserve due process, as required by the law.

Brillantes said in the next few days, the Comelec will send notices to all candidates who appear “illegitimate,” and will subject them to a hearing within 10 days.

Within 5 days from the last day of filing COCs, any registered candidate for the same position could also petition the Comelec to declare someone as a nuisance candidate, according to Comelec Resolution No. 9523.

Then a senator, now President Benigno Aquino III in 2007 also sought the disqualification of a certain Theodore Aquino. The Comelec also declared the latter a nuisance candidate.

Privilege, not a right

Nuisance bets abound partly because of the Constitution's loose requirements for occupying the Senate.

“No person shall be a senator unless he is a natural-born citizen of the Philippines and, on the day of the election, is at least 35 years of age, able to read and write, a registered voter, and a resident of the Philippines for not less than two years immediately preceding the day of the election,” says Article VI, Section 3 of the 1987 Constitution.

The Constitution also mandates the state to “guarantee equal access to opportunities for public service.”

Why, then, does the Comelec have to disqualify nuisance bets?

In a 2004 resolution, the Supreme Court (SC) clarified that running for public office is a privilege, not a right.

The SC's Resolution No. 161872, dated April 13, 2004, addressed the complaint of lawyer Elly Pamatong, then declared a nuisance bet in the 2004 elections. Pamatong wanted the Comelec to reverse its decision because it allegedly violates his right to “equal access to opportunities for public service,” as enshrined in the Constitution.

“Implicit in the petitioner’s invocation of the constitutional provision ensuring 'equal access to opportunities for public office' is the claim that there is a constitutional right to run for or hold public office and, particularly in his case, to seek the presidency. There is none,” the SC said.

“What is recognized is merely a privilege subject to limitations imposed by law,” it added, explaining that this was the intent of the Constitution's original framers. The SC said the constitutional mandate was a general guideline, not a “judicially enforceable constitutional right.”

To ensure that the equal access clause is not violated, the key is to apply the limitations “to everybody equally without discrimination,” said the SC. “Equality is not sacrificed as long as the burdens engendered by the limitations are meant to be borne by anyone who is minded to file a certificate of candidacy,” the High Court said.

In setting limitations, the SC said the state should also take into account “practical considerations.” These include the following:

“The State has a compelling interest to ensure that its electoral exercises are rational, objective, and orderly,” the SC said.

“To add into the mix candidates with no serious intentions or capabilities to run a viable campaign would actually impair the electoral process. This is not to mention the candidacies which are palpably ridiculous so as to constitute a one-note joke. The poll body would be bogged by irrelevant minutiae covering every step of the electoral process, most probably posed at the instance of these nuisance candidates,” the court explained.

The SC added, “It would be a senseless sacrifice on the part of the State.”

That, of course, presumes the qualified candidates would more likely be worth this privilege. – Rappler.com