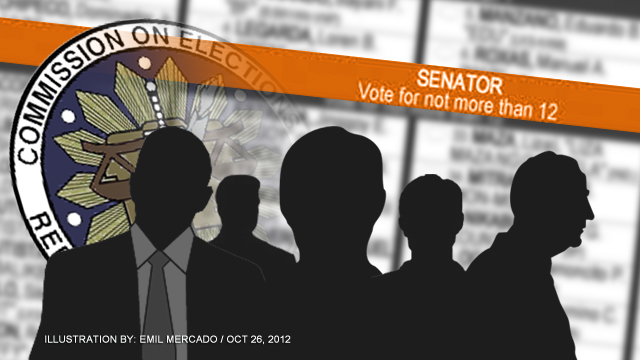 MANILA, Philippines - The Commission on Elections (Comelec) has added 5 more aspirants in its official list of senatorial candidates for the 2013 elections. This brings the total and final number of qualified senatorial bets to 32.

Comelec chairman Sixto Brillantes Jr said there won't be additions anymore in the list, which he said would be released on Monday.

The poll body on Friday, October 26, said the following are qualified to join next year's senatorial race:

Alcantara finished third in the 1957 Bar exams, and is now a law professor at the University of Santo Tomas. He is the founding chairman and president of ABAKADA Guro Party-list. He will run under the Social Justice Society party.

Penson is the president and chief executive officer of Ausphil Tollways Corp. He will run as an independent candidate.

This brings to 32 the total number of senatorial candidates vying for the 12 Senate seats that are up for grabs next year. On October 12, the poll body initially allowed 27 out of total 84 aspirants to run for senator in 2013. They are:

The 5 recently qualified bets were among the 59 aspirants called to a hearing on October 18 and 19 "to justify the legitimacy of their candidacies." - Rappler.com