Senate bets at UPLB: What would you ask them? 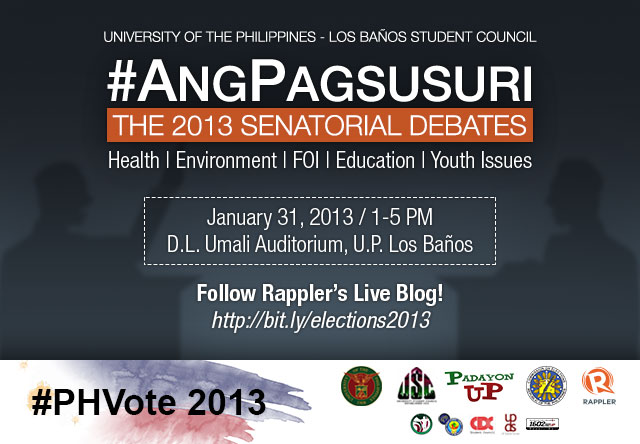 LOS BAÑOS, Philippines – The University of the Philippines, through its Student Council and other campus organizations, will hold on Thursday, January 31, the second of its series of senatorial debates dubbed "Ang Pagsusuri."

Aspirants from various political parties will debate on issues related to the implementation of the reproductive health, sin tax, and mining laws. They will also be asked on agrarian reform, state colleges and universities, and other so-called people's and students' issues.

The Thursday event will be held from 1-5 p.m. at the DL Umali Auditorium in UP Los Baños.

“Ang Pagsusuri” is part of Tatak Botante, a voters’ education project by UP student organizations and the Commission on Elections.

Rappler, as media partner, will be live blogging the debate (http://bit.ly/elections2013). (We live blogged the first debate on January 17.)

During the debates, a portion will be dedicated to questions that Rappler will be able to gather through social media. So tweet your questions to @rapplerdotcom using the hashtags #PHvote and #AngPagsusuri before the event, or as you follow our live blog here: