Why Mindanao is Erap country 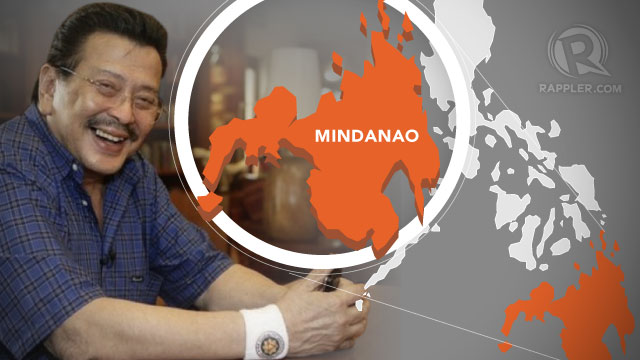 CAGAYAN DE ORO CITY, Philippines – Administration slate Team PNoy was first to visit Mindanao this week but the opposition is not worried. After all, it claims the region as turf.

UNA is pulling out all the stops, bringing two of its so-called 3 kings -- Vice President Jejomar Binay and former President Joseph Estrada -- to endorse its candidates.

“Since balwarte nga ito ni Presidente Erap, alam naman nating pagdating ng end of March, magiging busy na rin siya sa Manila so habang magiging available pa si Presidente uunahin na namin ang balwarte niya,” Binay told reporters here. (Since this is President Erap’s bailiwick, we know he will be busy by the end of March for his mayoral campaign in Manila so while he is available, we go to his bailiwicks.)

In 2010, Estrada beat President Benigno Aquino III in 12 provinces in Mindanao, in addition to 12 more in Luzon. Binay also won in Cagayan de Oro and Iligan but not in Bukidnon.

The former president got the largest number of votes in Mindanao ever given to a senator, vice president, and a president.

Why is Estrada big in Mindanao?

The book Ambition Destiny Victory: Stories from a Presidential Election said of the turnout, “This supported the findings of Pulse Asia FGDs that ordinary families in the South appreciated what the bourgeois in Manila severely criticized him for: his all-out war against Muslim secessionists.”

Besides the policy, Estrada has always stressed the value of Mindanao as the country’s food basket, and the need to improve agriculture and peace and order here. In 2010, he used this message in ads targeted to Mindanao voters.

The UNA stalwart is also allied with Cagayan 2nd District Rep Rufus Rodriguez, whom he appointed immigration chief during his administration.

Rodriguez told Newsbreak in 2010, “Mindanao is traditionally an Erap country. In 2001, Mindanao did not support the EDSA people power [that ousted Estrada].”

In Bukidnon, UNA has ties with the local Bukidnon Paglaum Party (BPP) of the Zubiris. Resigned Sen Juan Miguel Zubiri is an UNA senatorial bet while his father, Vice Gov Jose Maria Zubiri Jr, is again running for governor under BPP.

UNA hopes Estrada’s popularity in Mindanao will help deliver votes for its senatorial bets, who have been trailing behind the administration in a recent Social Weather Stations (SWS) survey.

Like Team PNoy, UNA plans to focus on the peace process in its Mindanao leg.

In the wake of the deadly Sabah standoff, UNA campaign manager Navotas Rep Tobias “Toby” Tiangco told Rappler that the candidates will inevitably discuss the issue.

“With the dry spell this summer expected to affect hydroelectric plans in the region and available power resources are getting scarce, UNA believes that a 15-year energy blueprint should be crafted to abate further energy crisis that could develop into an economic and political catastrophe,” Tiangco said in a statement.

The region has regularly experienced power outages, prompting the administration to call a summit on the energy crisis last year.

Some consumer, business and political groups criticized Aquino’s response to the problem, and blamed the privatization of power barges as the root cause.

Aquino had said that Mindanao will have to share the burden of higher power costs.

In UNA’s Bukidnon stop, Zubiri is expected to highlight the province’s No Balance Billing Program, which assures patients of 100% free health services in government hospitals.

The senatorial bet has been citing the program in all his sorties, and his plan to replicate it nationally.

Their feud is rooted in cheating in the 2007 polls. Pimentel filed an election protest against Zubiri, who resigned just days before the Senate Electoral Tribunal proclaimed Pimentel the rightful winner in 2011.

In 2007, Zubiri topped the polls in Pimentel’s hometown of Cagayan de Oro, and emerged first in Northern Mindanao. Pimentel placed only 5th.

UNA was supposed to have two candidates from Mindanao but Pimentel bolted the alliance over his objection to Zubiri’s inclusion in the slate.

Zubiri said unlike many candidates of Team PNoy, UNA will not skip the hometown of rival candidates.