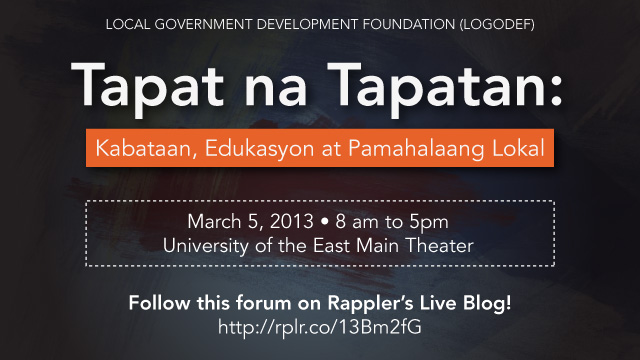 MANILA, Philippines – Two senatorial candidates, whom college students did not choose in an earlier mock poll, made it to the Magic 12 in another round of voting after speaking at a forum on educational reforms.

Zambales Rep Mitos Magsaysay of the opposition United Nationalist Alliance (UNA) topped the mock poll that was conducted on Tuesday, March 5, by the Local Government Development Foundation (Logodef), together with partner schools at Manila’s university belt.

Of those who attended the “Tapat na Tapatan” forum at the University of the East (UE), more than 280 students participated in the poll.

The number of respondents was much smaller than the mock poll conducted by Logodef in the same partner schools – UE, Centro Escolar University, Colegio de San Juan de Letran, and San Sebastian College – in February, which showed 9 candidates from Team PNoy and 4 from the United Nationalist Alliance (UNA) making up the “winning” circle.

Magsaysay and Llasos were the only two among the 9 candidates who attended the forum who made it to the leading pack. The reason would be obvious – they wowed the students with their feisty comments on what the Aquino administration is doing wrong – from the allegedly poorly thought-out K+12 education program to the supposed mishandling of the Sabah situation.

Click to see Rappler’s live blog and videos of the event.

In the March 5 mock poll, Logodef said the respondents put an average of 10 names on their list of preferred senatorial candidates.

The senatorial candidates they most preferred were:

Aside from Magsaysay and Llasos, there are 4 more names in the new list that were not in the winning slate in the earlier mock poll of a bigger sample size. They are Puerto Princesa Mayor Ed Hagedorn (Independent), Jack Enrile (UNA), Antonio Trillanes IV (Team PNoy), and Grace Poe (Team PNoy).

The other candidates who joined the Logodef-UE forum were Christian Señeres, Greco Belgica, and Baldomero Falcone of the Democratic Party of the Philippines; John Carlos delos Reyes and Rizalito David of Ang Kapatiran; Eddie Villanueva of Bangon Pilipinas; and Samson Alcantara of the Social Justice Society. – Rappler.com