[Q & A] Brother Eddie interprets ‘separation of church and state’ 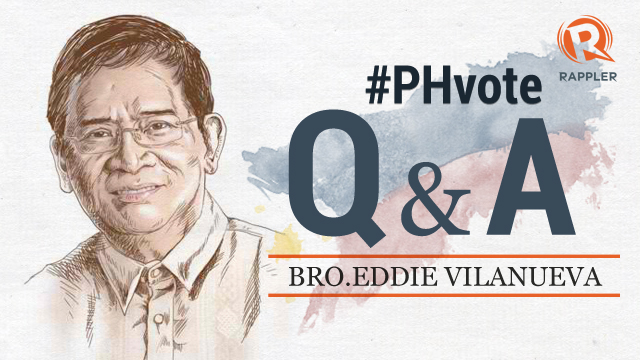 MANILA, Philippines – Eduardo “Eddie” Villanueva is running for senator under his party, Bangon Pilipinas, after two failed presidential bids in 2004 and 2010. While he was a student leader in his youth and later a professor before founding the Jesus is Lord Movement, he has been known best as a televangelist. So guess what he was inevitably asked by curious students during a senatorial forum organized by the Local Government Development Foundation and partner schools at the University of the East on March 5.

Question: After being an evangelist, how did you know that your calling is in politics now? Won't there be any contradiction?

Unang-una, dapat malaman ng lahat, ang ang isang Pilipino ay may karapatan na maglingkod sa bayan. Ang gobyerno ay nilalang ng Diyos para magkaroon ng righteous good governance at ang mga resources at kayamanan ng bansa ay magkaroon ng proper management at walang naghihirap. (First of all, all should know that a Filipino has the right to serve his country. God created the government to have righteous governance and for resources to be properly managed so that no one would be poor.)

Three: “Religious freedom is absolutely guaranteed and protected.” Kapag nakita natin ang Konstitusyon…ang preamble (The preamble of the Philippine Constitution talks about this separation of church and state) – “We, the sovereign Filipino people, imploring the aid of the Almighty God...” – you cannot kick out God from the government because God created every nation and every government, and in the preamble of the Philippine Constitution, God is being honored and acknowledged.

“Don't be afraid. Don't worry. The state will never interfere in the ecclesiastical affairs and duties and functions of the Church. Religious freedom is protected and guaranteed. Freedom of worship is absolutely insured. That's why we will inscribe in American Constitution the separation of church and state.”