NPA intensifies checkpoints ahead of polls 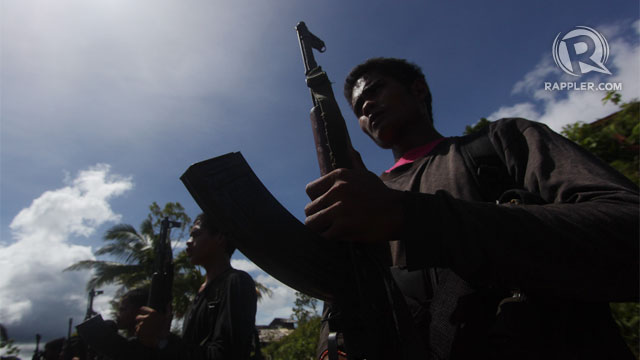 MANILA, Philippines – The New People’s Army said Thursday, April 18, it has intensified checkpoint operations in its territories to “ensure peaceful conduct of elections.”

These policies, according to him, include:

“The putting up of checkpoints by the different units of the New People’s Army under the North Central Mindanao Regional Command in the areas of their operations is in accordance with these policies,” Juanito noted.

He explained that the checkpoints would also ensure that “despotic, anti-people and counterrevolutionary candidates and party-list groups will not be able to campaign freely within the guerrilla zones.” He said examples of these individual and groups include large-scale mining operators, land grabbers, loan sharks, illegal drug traders, and criminal coddlers, among others.

Juanito appealed to the public for understanding, saying what they’re doing is necessary to protect the interest of their communities.

“We beg for the understanding and consideration of the affected passersby for the minor inconvenience.”

While the group has criticized the electoral system, Juanito said elections are “an opportunity for the people to voice out their issues.”

“Thus, we open our guerilla zones to candidates and partylists who recognize the red political power and respect the revolutionary policies to present their platforms and programs.”

“Ridiculous! All the recorded violent incidents are their handiwork,” he said.

The military has condemned the checkpoint operations being conducted by the communist fighters.

Majority of cops, soldiers and government militias captured by the NPA in Mindanao were seized in these checkpoints.

The Eastern Mindanao Command also reminded politicians not to give in to the alleged extortion activities of the group. - Rappler.com