PDEA not mandated to nab 'narco-politicos' 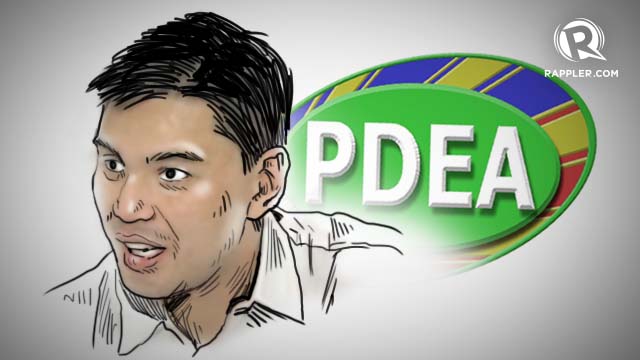 'DON'T USE US.' The Philippine Drug Enforcement Agency tells politicians to spare them from political mudslinging.

MANILA, Philippines - The Philippine Drug Enforcement Agency (PDEA) denied on Thursday, May 2 that it is investigating politicians and candidates allegedly accepting drug money.

"Walang definition ang narco-politics (There is no definition of narco-politics) under Republic Act 9165. But what we submitted to lawmakers were names of people who were actually arrested by PDEA and other law enforcement agencies who violated RA 9165 or the Comprehensive Dangerous Drugs Act," he added.

“I would also like to humbly request that you conduct a background investigation particularly on Caloocan’s mayoral candidate Oscar “Oca” Malapitan and his running mate," Uni-Mad Caloocan coordinator Arturo Magbanua asked Cacdac.

Almeda, former chief of staff of Ang Galing Pinoy party-list Rep. Mikey Arroyo, was implicated in illegal drug trade in November after a sports utility vehicle assigned to Almeda was seized in a buy-bust operation in Makati. Nine kilos of shabu were found in the vehicle, which was being used by American disc jockey Brian Hill. Hill was accused of peddling drugs in elite parties.

The National Power Corporation (Napocor) loaned the vehicle to Almeda when Arroyo was still chairman of the house energy committee in 2008. It said Almeda requested for the vehicle when he conducted an ocular inspection of Napocor’s decommissioned power plants in Luzon and in Eastern Visayas.

Almeda said in media interviews that he had returned the vehicle to Napocor in 2009 but Napocor denied this.

PDEA: Don't use us

Carreon refused to comment on so-called "narco-politics" in Caloocan City, stressing that the agency is apolitical. He added that PDEA did not receive such letter from Uni-Mad.

"Anong letter? Wala kaming natanggap. (What letter? We did not receive anything.) I don't appreciate the fact that that organization is using us," Carreon said.