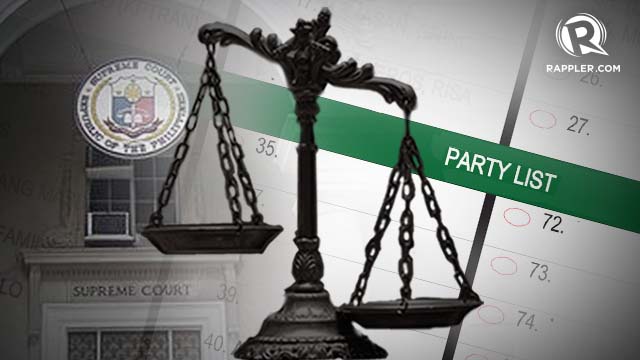 NEW GUIDELINES. SC introduced new parameters in determining what groups could qualify for the partylist system.

MANILA, Philippines – Voters will have at least 12 fewer party-list groups to choose from after the Commission on Elections (Comelec) on Monday, May 6, said it has disqualified these parties.

The most prominent group on the list is Mikey Arroyo's Ang Galing Pinoy, which supposedly represents security guards. The other groups barred from the party list include the following:

Meanwhile, groups set for re-hearing include Pacyaw, 1-Utak, and Pasang Masda. Comelec chair Sixto Brillantes Jr said the poll body will hold a hearing on Thursday, May 9, to decide the fate of these 3 groups.

The Comelec said 24 groups, on the other hand, have retained their accreditation. The most prominent among these is the party-list group Ako Bicol.

In a landmark decision on April 15, the Supreme Court changed the basis for accrediting party-list groups, and ruled that these need not represent the marginalized. The SC then remanded the petitions of 54 disqualified party-list groups to the Comelec. Of this number, only 41 secured a mandatory injunction for the Comelec to include them in the ballot. – with reports from Paterno Esmaquel II/Rappler.com