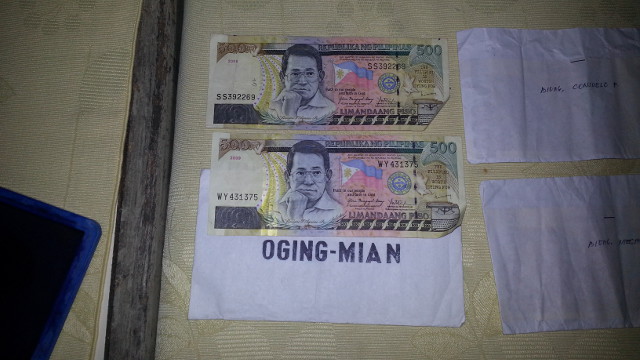 VOTE-BUYING? Envelopes labelled with the nicknames of brothers running for governor and congressman were distributed among police officers in Pintuyan, Southern Leyte. All photos courtesy of Eva Tomol

In an interview with Rappler on Saturday, May 11, Pintuyan lawyer Eva Tomol said Estrella started the cash distribution by announcing, “I have something to make you happy from Oging, Mian and Berting!”

"Oging" is the well-known nickname of Roger Mercado, the incumbent congressman of Southern Leyte who is running for governor under the National Unity Party (NUP) in the 2013 mid-term elections.

“Oging Mercado” is how his name will appear in the ballot.

"Mian" is the nickname of Damian Mercado, brother of "Oging" and current governor of Southern Leyte. He is running for a congressional seat under NUP.

"Berting" is the moniker of Dr. Roberto Lagumbay, an incumbent Sangguniang Panlalawigan member running for Southern Leyte vice-governor in the 2013 elections.

Tomol received this information from a police officer present during the distribution. He added that the envelopes were labelled “Oging” and “Mian.” 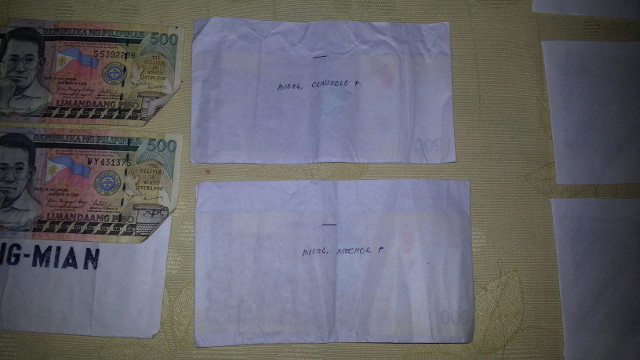 At 5:40 p.m. on May 11, Tomol also reported that a teacher named Melchor Diong approached former Southern Leyte Gov. Rosette Lerias to show her two envelopes he received from a barangay official.

The envelopes had his and his mother’s name on it. Inside each envelope contained a P500 bill.

She had been asked to distribute them but Tomol says her conscience could not stomach the instructions. Each envelope is labelled with a name of a voter in the area. - Rappler.com