Prisoners to vote on election day 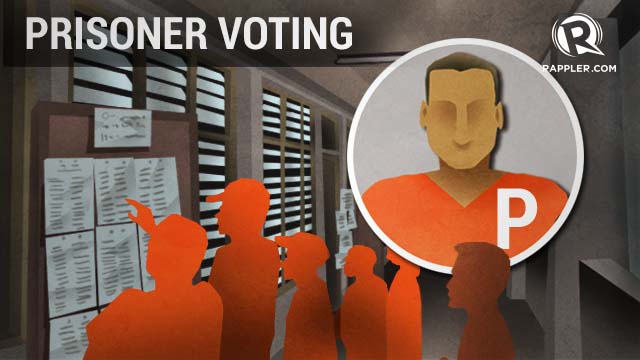 MANILA, Philippines - Nearly 44,000 prisoners all over the country will cast their vote on Monday, May 13.

Commission on Elections (Comelec) Commissioner Lui Guia said the decision of the agency to allow the non-convicted prisoners to vote is a way to preserve their right to suffrage, Interaksyon reported.

"(In the case of) prisoners with no final judgment from the court, the right to suffrage is preserved because they are not yet convicted, they were only charged. The Comelec gave them the right to vote," Guia said on Sunday, May 12, according to the report.

The prisoners will be under the supervision of the Bureau of Jail Management and Penology (BJMP) during the voting process.

In coming up with the decision, the Comelec distinguished jailed voters into two categories:

These prisoners come from 212 detention centers from 140 municipalities around the country.

The Comelec also allowed inmates to vote in the 2010 elections in accordance with Resolution No. 8811.

The number of voters required for inmates to vote inside their facility, however, was reduced, from above 100 to above 50 this election.

Start of voting for the inmates will commence at exactly 7 a.m. and will close at 3:00 p.m. Ballots of the prisoners will be counted last by the mother precinct. - Rappler.com