Peping: No bad blood with PNoy 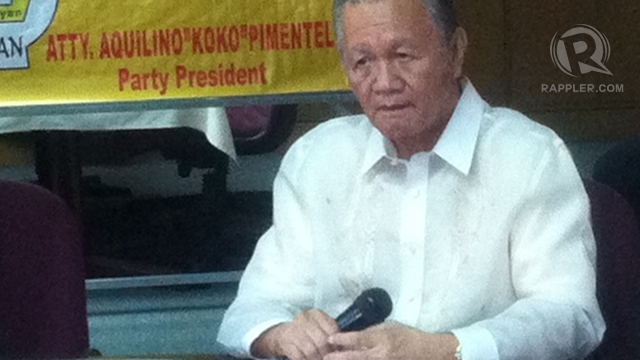 BAD BLOOD? Jose "Peping" Cojuangco says there is no bad blood between him and his nephew, President Benigno Aquino III.

Speaking to reporters, he also said he doesn't see a “problem” with his new position in Binay's party, the Partido Demokratiko Pilipino-Lakas ng Bayan (PDP-Laban). “Anyway, not everyone who campaigned for President Noynoy belonged to the Liberal Party,” Cojuangco said in Filipino.

He noted that on a personal level, there is no bad blood between him and his nephew. On rumors that his ties with Aquino are no longer harmonious, Cojuangco said, “Nananaginip ang mga nagsasalitang gano'n.” (Those who are saying that are dreaming.)

Meanwhile, Cojuangco said he respects Aquino's leadership style, explaining that each president has his or her way of leading the Philippines. (More in the video below.)

“If that is the way he thinks it's gonna be run, he can do that. That's his privilege, in the same manner that when Cory was president, she had her own way and for that matter, Gloria had her own way. It's a matter of whether there will be an achievement or not in the decisions they're making,” Cojuangco explained. The late Cory Aquino was Cojuangco's sister.

Cojuangco spoke at a press conference after the oath-taking of PDP-Laban's two new members, Cebu Gov Gwen Garcia and Zambales Rep Milagros "Mitos" Magsaysay, who both eye the Senate in 2013.

For his part, Binay defended his opposition to the ruling Liberal Party despite his decades-long support for Aquino's family. He served in the Cabinet of the President's mother, Corazon, and defended her government against coup attempts.

The Vice President, however, said he doesn't consider UNA as opposition to Aquino. He said he prefers the term “constructive opposition.” (Read: Binay and the politics of firsts.)

“Criticism doesn’t mean that you don’t support. This is one important thing that the administration has to accept and realize. Your critics are not always your opponents. Your allies can be your critics also,” explained the secretary-general of UNA, Navotas Rep Tobias “Toby” Tiangco.

UNA is different from the ruling Liberal Party in that it is “not elite,” UNA spokesperson JV Bautista earlier told Rappler. “We are the party of the masses.” (Read: UNA vs LP: What's the difference?) – Rappler.com