The Department of Budget and Management on Tuesday, August 25, submitted the proposed P4.5-trillion 2021 national budget, as House Speaker Alan Peter Cayetano pledged it would not be prone to corruption.

The proposed 2021 expenditure program is 9.9% higher than this year’s P4.1-trillion budget and is equivalent to 21.8% of the projected gross domestic product for next year.

The submission signals the start of the months-long deliberations on the fiscal program in both chambers of Congress, before it goes to President Rodrigo Duterte for his signature.

Cayetano said he hopes the budget bills will be approved by November “as a sign of unity” among lawmakers.

The House Speaker also said he will prioritize giving opposition lawmakers a copy of the proposed budget, adding that they will have time to ask questions on the measure.

(We will not put anything here that will [make it] easy to create opportunities for graft and corruption. But we’re not hypocrites as well. We aren’t naive to say that there won’t be any opportunity for corruption. That’s where transparency, accountability, and monitoring come in.)

Cayetano went on to say that good projects will always be included in the proposed budget, even if there could be an opportunity for corruption.

(Meaning, if it’s a good project, we will always put it in the budget even if there’s an opportunity for corruption. We only have to monitor so that opportunity will be gone. Because if we keep saying that corrupt officials might plunder the money, we would not be able to pass a budget.)

For two years in a row, the government had operated on a reenacted budget – for 4 months in 2019 due to a deadlock over pork barrel projects during the speakership of Gloria Macapagal Arroyo, and for a week in 2020 due to “last-minute insertions” during the bicameral conference committee when Cayetano was already the Speaker.

The President vetoed the questionable projects last year while he ordered additional requirements for alleged insertions this year, making it harder to release funds for these projects.

Yet Cayetano is certain that corrupt officials will still find ways to pocket taxpayers’ money.

(Because everything, even a single centavo – those who are smarter than the others, they will find ways to steal funds. That’s why we have to be ahead of them. Just like the virus. This virus is smart and could anything to divide us from one another.)

Among agencies, the education sector, consisting of the Department of Education, state universities and colleges, Commission on Higher Education, and Technical Education and Skills Development Authority, has the biggest share at P754.4 billion, which is 16% or P104.2 billion higher than this year’s P650.2-billion adjusted budget.

The adjustments in the 2020 budget were due to the realignments done by the executive to fund the pandemic response. 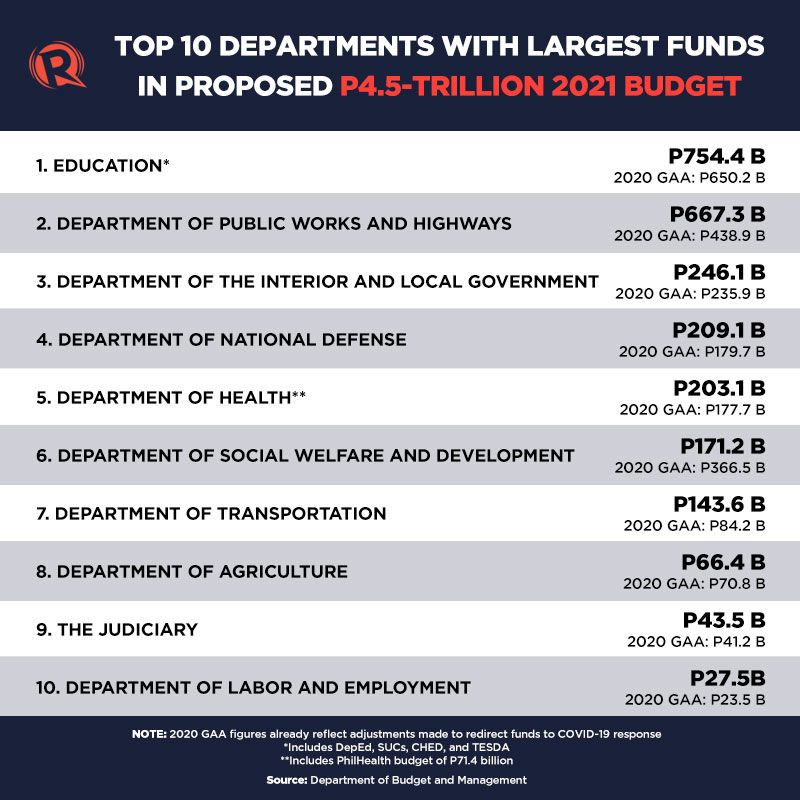 While the education sector would receive the lion’s share of funds, the proposed additional budget for public works is the highest among agencies as the government believes it will revive the recession-hit economy.

The Department of Public Works and Highways (DPWH) gained the most by P227 billion to P667.3 billion, which is 55% higher than this year’s P438.9-billion budget. About a fourth of the DPWH’s funds would go to road projects.

It is followed by the Department of Transportation with a proposed allocation of P143.6 billion. Its proposed budget went up by P61.2 billion from this year’s P84.2 billion, as it is set to fund P106.3 billion worth of rail projects.

The Department of Health, meanwhile, is poised to get P203.1 billion – up by 14.29% or P25.4 billion. The proposed allocation includes the following:

Meanwhile, the proposed funds for the Department of Social Welfare and Development dropped to P171.2 billion. The P200-billion cash aid program had brought its 2020 budget to P366.5 billion.

The Department of the Interior and Local Government and the Department of National Defense continue to enjoy huge chunks of the budget, with proposed funds worth P246.1 billion and P209.1 billion, respectively.

On July 30, Duterte approved the budget proposal for 2021. – Rappler.com