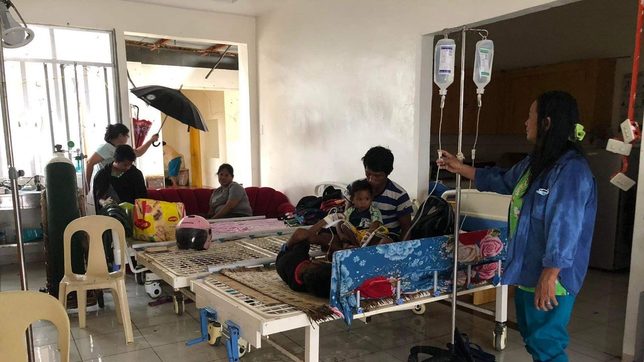 Facebook Twitter Copy URL
Copied
Heavy rains since the New Year have drenched staff and patients in the hospital, which lost much of its roof to Odette

The hospital’s chief nurse, Rowena Baclaya, said they have some cases of pneumonia.

Personnel salvaged what they could, including medicines.

But heavy rains since the New Year have flooded their work areas, including patients’ wards, the doctor said. Odette ripped off a substantial portion of the hospital’s roof.

“We are having tough times but we try our best to deliver despite the dire situation,” Resurreccion told Rappler.

“The hospital is in its worst form; this is an unimaginable situation,” said hospital attendant Aida Cervantes.

“It’s a calamity and we were not spared as even our houses were badly damaged,” she said.

Baclaya said the hospital is short of medicines but aid is trickling in.

A group of volunteers delivered several boxes of medicines to the hospital on January 2.

Basilio said he was huddled with two boys from Caridad, Lawrence, 2, and Gianne, 6, in a small section spared from dripping water. All three are recuperating from diarrhea. – Rappler.com