Sotto: Duterte not to blame for worsening pandemic situation in PH Facebook Twitter Copy URL
Copied
'I could not imagine any other President in the past [who] would be able to handle this pandemic,' says Senate President Tito Sotto

Senate President Vicente “Tito” Sotto III shielded President Rodrigo Duterte from criticism over the government’s coronavirus response, saying he is not to blame for the worsening pandemic situation in the country.

While Sotto is exasperated with how Duterte’s pandemic task force has failed to stop the recent surge in COVID-19 cases, he still found no fault in the President, who has chosen the people on the task force and approves their policy recommendations. 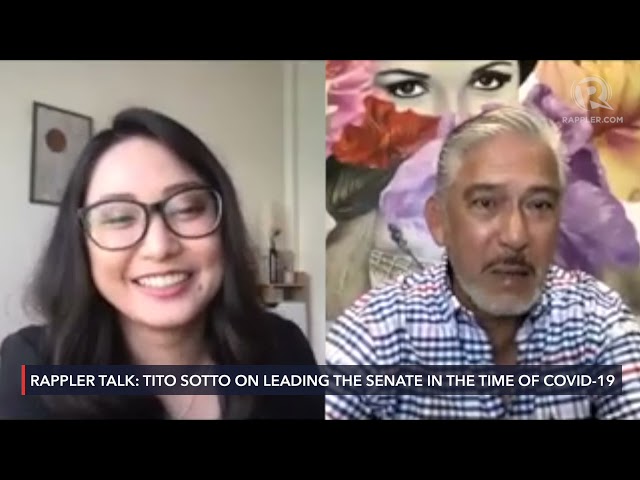 “I could not imagine any other President in the past [who] would be able to handle this pandemic, yes, in the ideal way that we would want it to be…. I will not go to that extent of saying that the problem we’re in now is because of the President. I don’t think so,” Sotto said in a Rappler Talk interview on Thursday, March 25.

The Senate President made the statement hours before the Department of Health (DOH) announced 8,773 new cases of COVID-19 – a new record-high for the Philippines that has seen a recent spike in cases despite imposing one of the longest and strictest lockdowns in the world.

Sotto earlier attributed the unprecedented rise in COVID-19 cases to a “combination” of the “incompetence” of DOH officials and Filipinos who disregard the rules.

He had slammed Health Secretary Francisco Duque III for his failure to effectively head the Inter-Agency Task Force (IATF) on the Management of Emerging Infectious Diseases, the policy-making body composed of Cabinet officials helming the country’s fight against the pandemic.

Sotto previously backed the call of Senator Imee Marcos to abolish the IATF, but later told Rappler this was just him expressing his “exasperation” over the current situation.

“On my part, it was a mere exasperation. So it’s a wake-up call. Bottomline, it’s a wake-up call to the IATF that, ‘Hold on, there are people among your ranks who are not doing their job well,’” said Sotto in a mix of English and Filipino.

Instead of completely abolishing the IATF, Sotto urged the IATF to regularly consult public health officials so that its pandemic response policies would be rooted in science.

He also said that if authorities had focused their efforts on treating COVID-19 in the first place, then cases would not have shot up into the thousands a year later.

Several senators said the Duterte government’s mismanagement of the COVID-19 pandemic has brought the country back to square one in terms of managing cases.

The administration also faces widespread criticisms over the pace of the COVID-19 vaccine rollout, which officially began on March 1 and remains limited to medical frontliners.

Nine mayors are now drawing flak for jumping the vaccine priority line amid the scarcity of COVID-19 vaccine supplies in the Philippines. Sotto said it is “very difficult to judge” the local chief executives, especially if their primary motivation was to help boost confidence on the COVID-19 vaccination program. – Rappler.com