MANILA, Philippines – The cost of generating electricity from different energy sources is the single biggest item in most of Philippine consumers’ electricity bill, at 50% to 60%. This has propelled the cost of electricity in the country to over P8 kilowatts per hour, one of the most expensive rates in Asia.

This infograph shows the key private sector players generating the electricity that retailers sell to end-users, such as households, offices and factories.

Diversified conglomerate San Miguel Corp. is the biggest producer, accounting for 22% of the total sold to the grid, based on their aggregate share of power produced in plants they own or partly own (“attributable capacity” in industry jargon). Even if the group’s unit, SMC Global Power, sold the 620-megawatt (MW) Limay Combined Cycle plant in 2011, its 2,545 megawatt (MW) attributable capacity has eclipsed prominent business clan, Aboitiz, which comes second at 20% (2,350MW), and the Lopez group third with 18% (2,150 MW).

The Lopezes, long identified with the power industry, has the greenest portfolio with its plants sourcing energy mostly from geothermal and natural gas. Lopez-led Energy Development Corp., is the largest producer of geothermal energy in the Philippines and the largest IPP in Visayas with 43.3% share.

Over the past decade, the Philippine government actively privatized current power plants and enticed investors to build additional ones to address lack of capacity, insufficient reserve margins, and the resulting spikes in spot prices.

New players have emerged, including Global Power Corp. of Metrobank’s George Ty that have power plants in Visayas accounting for 12.3% of total. Other smaller new entrants in this capital-intensive industry include the Consunjis via SEM-CALACA Power Corp. (3.7%) and Millenium Holdings (3.8%), which now controls the Limay plant. Some major Philippine business groups are joining the fray, including the Ayala and Sy groups, which have sealed partnerships.

Government-owned plants in Mindanao, Palawan, Batanes and other island regions, which are off the grid, remain dependent on power generated by the plants owned and IPPs commissioned by Napocor. In effect, the state, which used to monopolize power generation, now accounts for only 8% (1,356MW) nationwide and the IPPs 18% (2,893MW).

These 2011 data were sourced primarily from the Energy Regulatory Commission, Department of Energy and the featured business groups’ corporate websites. – Rappler.com 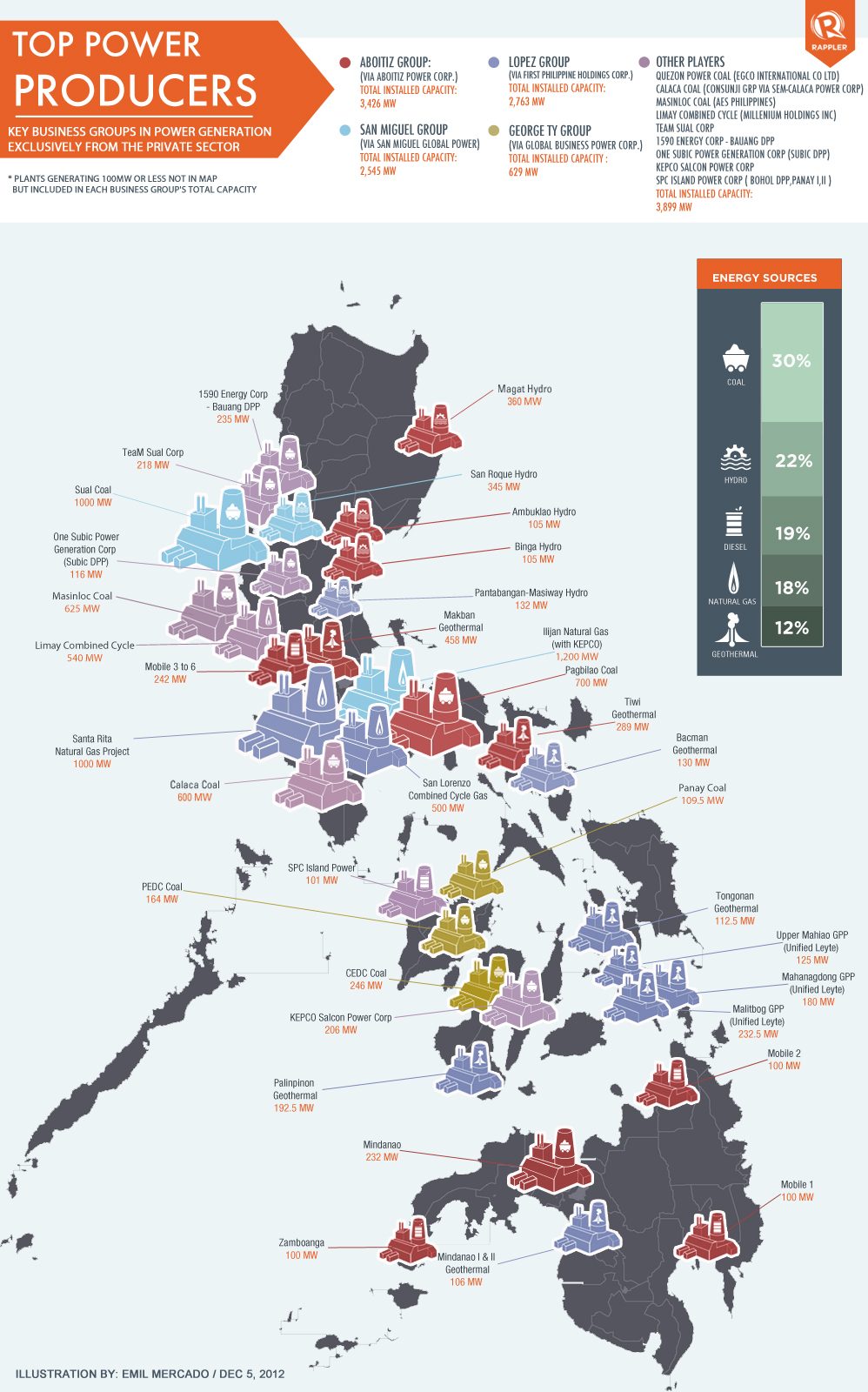