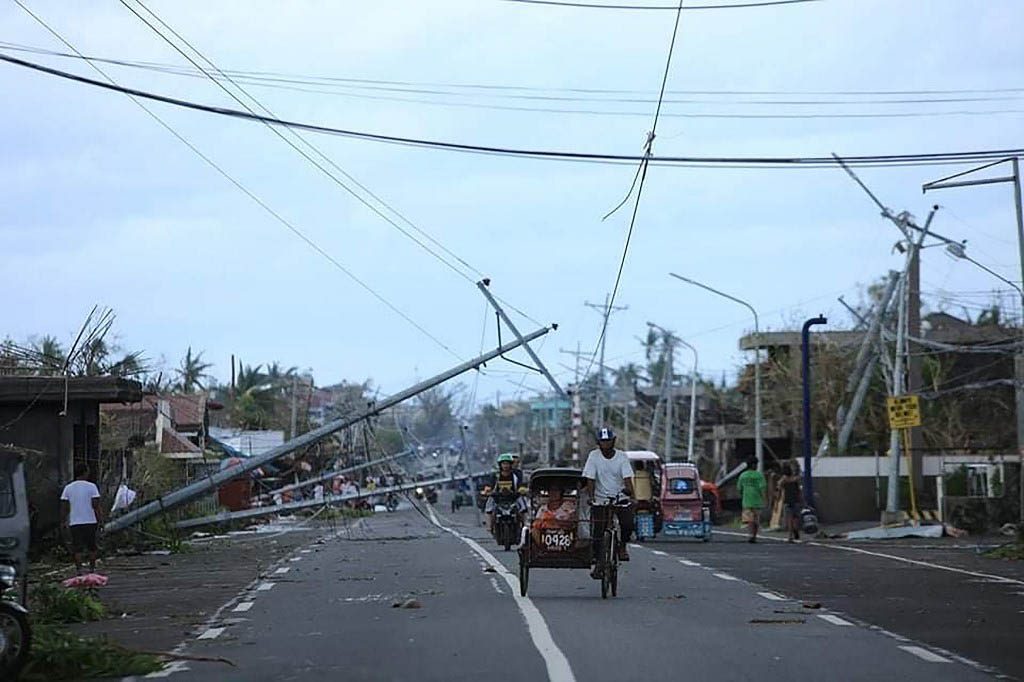 A tricycle speed past toppled electric posts destroyed at the height of super Typhoon Goni after it hit Tabaco, Albay province, south of Manila on November 1, 2020. (

At least 20 people were killed when Super Typhoon Rolly (Goni) barreled across the Bicol and Southern Luzon regions of the Philippines on Sunday, November 1, the Office of Civil Defense Region V (Bicol) said on Monday, November 2.

Of the 20 fatalities, 14 were from Albay, and 6 were from Catanduanes.

The fatalities in Albay were from the following municipalities and city:

In Catanduanes, the fatalities were from:

The Bicol region felt the full fury of Super Typhoon Rolly, which weakened into a typhoon on Sunday morning, and weakened further into a tropical storm as it left the Philippine landmass and made its way to the West Philippine Sea on Sunday evening.

Rolly affected more than 2 million people across 12 regions in Luzon and the Visayas.

No electricity, water in most parts of Bicol

As of 8pm, almost all provinces in the Bicol region – except for Masbate – have no electricity.

Communication lines down in Catanduanes

Teams from the Armed Forces of the Philippines, Bureau of Fire Protection, and the Philippine Coast Guard have been deployed to Catanduanes, said Interior Secretary Eduardo Año.

Citing the regional police chief, Año said 90% of infrastructure on the island was damaged.

“Kaunting tiis na lang at makukuha natin ang picture ng buong Catanduanes (Just a little more patience and we will get the full picture in Catanduanes),” the interior secretary added.

This adds to nearly P2 billion in agricultural losses from Typhoon Quinta (Molave), which traced a similar path a week earlier.

The Department of Agriculture (DA) has 133,326 bags of rice seeds, 17,545 bags of corn seeds, and 2,000 kilos of assorted vegetables to be distributed to affected farmers for replanting, Dar added.

For affected fishermen, the DA will distribute 10 million tilapia and milkfish fingerlings, as well as fishing equipment, Dar said.

These farmers and fishermen may avail of a P25,000 loan from the DA at zero interest, payable in 10 years, the agriculture chief said. Depending on the size of their farmland, farmers may also receive P10,000 to P15,000 as insurance from the government for their damaged crops.

Despite the agricultural damage, Dar said there is enough rice supply in the affected regions.