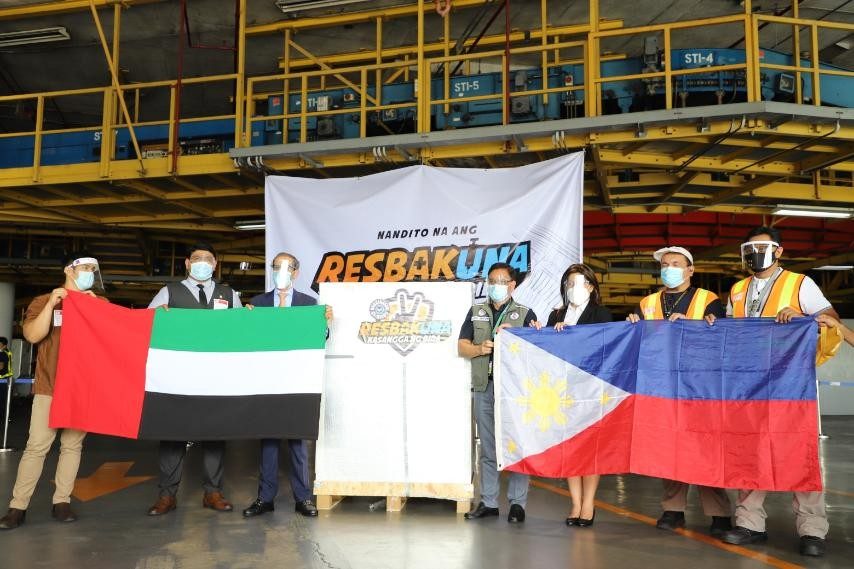 The United Arab Emirates donated 100,000 doses of Sinopharm’s COVID-19 vaccine to the Philippines on Wednesday, August 11, as cases continued to rise in the Southeast Asian nation.

The shipment of 100,000 Sinopharm doses is the first vaccine donation made by the UAE to the Philippines. It also marks the entry of a seventh vaccine in the country’s public vaccination drive against the coronavirus.

An Etihad airplane carried the delivery which landed at the Ninoy Aquino International Airport at about 1:55 pm. It was received by Office of the Presidential Adviser on the Peace Process Assistant Secretary Wilben Mayor and UAE embassy Acting Chargé d’Affaires Khalid Alhajeri, along with other officials.

Mayor said the Sinopharm vaccines donated on Wednesday had been given emergency use approval by the FDA earlier in the day. The vaccine, called HayatVax, was manufactured in the UAE.

On Wednesday, the National Task Force Against COVID-19 said the UAE’s donation is separate from the 1 million more Sinopharm doses expected to arrive later in August as a donation from China.

The UAE had approved Sinopharm’s vaccine for emergency use in December 2020. Many in the Gulf nation have been inoculated with the Chinese-made vaccine, while the Pfizer-BioNTech, AstraZeneca, and Sputnik V vaccines are also offered to citizens and residents.

Over 1,000 Filipinos participated in Phase 3 trials for the vaccine done in the UAE.

Before the arrival of the UAE’s donation, Sinopharm had only been used in the Philippines by President Rodrigo Duterte, his security team, as well as some lawmakers and Cabinet officials. Its use took place even before the inoculation of health workers, and was done despite the lack of emergency use authorization from the Food and Drug Administration.

Regulatory approvals for the use of the vaccine – either through a compassionate special permit or emergency approval granted for donated doses – were issued only weeks later, following public backlash.