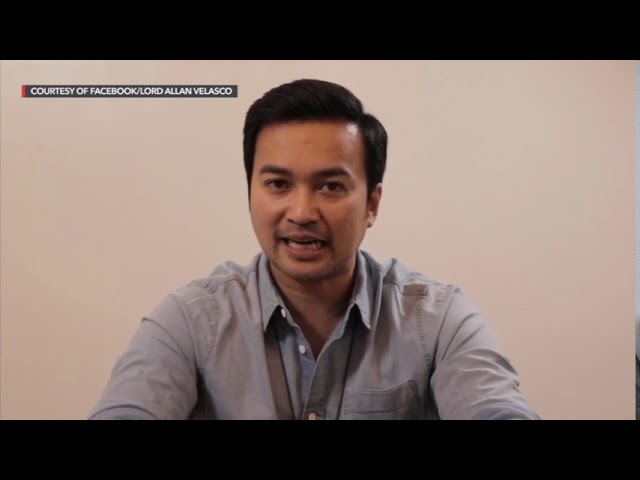 In a Facebook video posted late Friday night, October 2, Velasco said the only way Cayetano can prove he has palabra de honor or word of honor is if he abides by their term-sharing deal and willingly steps down as Speaker.

“Nakakahiya ang mga nangyayari (The recent events are embarrassing). We are congressmen. We are called honorables. Our word is our honor. The people should be able to trust their leaders when they give their word,” the Marinduque congressman said.

“Speaker Cayetano, you gave your word in front of the President to honor the term-sharing agreement. Please, I appeal to you, finish the budget and resign on October 14,” he added.

Cayetano already offered to step down as Speaker on Wednesday, September 30, only for his colleagues to refuse his resignation. It’s clear proof that Cayetano still controls a majority of lawmakers.

The resignation offer came just a day after both the Cayetano and Velasco camps met with President Rodrigo Duterte to finally resolve the term-sharing row in the chamber.

Under the deal green-lighted by Duterte himself, Cayetano is to serve as Speaker for the first 15 months of the 18th Congress, then Velasco is to take over in the 21 months after that. That deal should be respected, Duterte told both men during their recent meeting.

But both parties gave conflicting statements as to when Velasco’s takeover should be. His allies claimed it will be on October 14, but the Cayetano bloc insisted no exact date was agreed upon.

The Speaker would later reveal in a privilege speech that the President repeatedly asked Velasco during their meeting to allow Cayetano to extend his speakership until December.

This is supposedly aimed to ensure a smooth passage of the proposed P4.5-trillion budget for 2021. Velasco refused.

But on Friday, the Marinduque congressman accused Cayetano of using the budget as a means to cling to power.

“To hang on to the speakership and extend his term until December on the pretext of budget deliberations only raises suspicion,” said Velasco. (READ: Velasco: Cayetano’s ‘political maneuverings, theatrics took budget delibs hostage’)

He denied he had any plans to oust Cayetano and slammed allegations that he was a “lazy” congressman in the past months.

“This is a complete falsehood.  I have always worked quietly and consistently away from the camera,” Velasco said.

(Coup plot? It’s a cheap shot! I will repeat the words I once said before the President and the people: I am a man of principle who honors his word.)

The 2021 budget is an election year budget. Political analysts believe keeping the speakership is crucial for Cayetano if he has any plans of running for president in 2022. (READ: In House power play, Speaker Cayetano’s Palace dreams are at stake)

‘Budget for the country or budget for your friends?’

Velasco slammed Cayetano for allegedly favoring his allies in the distribution of funds under the 2021 budget.

(What our representatives want is for our Congress to work on a fair and equitable budget for healthcare, health facilities, poverty alleviation, and education. My question for Speaker Cayetano and his friends: Is this a budget for the country or budget for your friends?)

He also hit the Speaker for allegedly using the 2021 budget to “blackmail” the President.

Cayetano already vowed the House would still be able to pass the 2021 budget before Congress takes a break in two weeks.

Still, the House had to suspend plenary deliberations on the budget for a day and half after he offered to resign.

On Friday afternoon, allies of the Speaker challenged the Velasco bloc to step down from their key House posts if they can no longer cooperate with Cayetano.